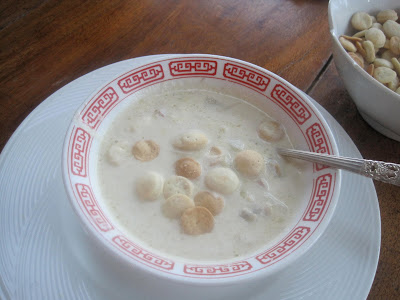 Remember A Perfect Storm? New England fishermen who earn a living on pitching boats in freezing sleet are the kind of people who should eat a soup made of butter, potatoes, slab bacon, and rivers of cream. Those are the people for whom Boston clam chowder -- a truly bonkers dish, when you think about it -- was invented. Not for the likes of me.
That doesn't mean I don't appreciate it. As you would expect, Thomas Keller's chowder was sensational -- rib-sticking, smoky-sweet, packed with clams. It also required 11 cooking vessels, plus a parchment lid and a conical strainer. Keller cooks ingredients separately: leeks in one skillet; shallots and clams, in another; a pan to crisp the bacon; yet another to boil the potatoes. Then you cool the potatoes on a tray. Keller often calls for cooling things on trays. I sigh. I feel slovenly. But there's just not room on the counter of my kitchen to cool things on trays. There's not room in my sink to wash the trays, or in my drainer to dry them. I mean, I can make room, but it's a hassle. I remain skeptical that this book belongs in the home kitchen.
Anyway, to garnish the chowder, I made Keller's soup crackers, which were tedious to cut out and ultimately ridiculous. 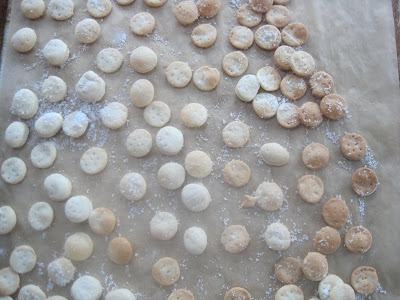 I just typed that snotty sentence while eating leftover soup crackers. They are delicious. I still don't think soup crackers are worth the effort. Do I?
Some other dishes we've cooked out of Ad Hoc:
-Sweet potato and lentil soup. Again with the trays, but what fantastic soup. "I don't usually like lentils," said Isabel, as she devoured her soup. "I don't usually like soup!" said Owen, as he devoured his. Highly recommend.
-Chocolate chip cookies. 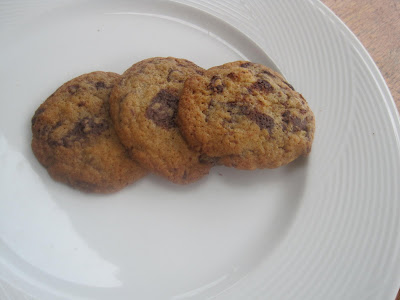 Isabel is trying to bake the perfect chocolate chip cookie and has been testing recipes for the last few weeks. The other day she tackled Keller's, which calls for chopping up two different strengths of dark chocolate then fastidiously sifting out and discarding the cocoa dust. We liked these cookies fine, but there was too much chocolate, not enough distinction between chunk and cookie to put them at the top of our ranking.
Incidentally, here are the interim results of Isabel's testing, listed by the source of recipe:
1. Cakewalk by Kate Moses (Robust cookies flavored with espresso powder, irresistible and possibly unbeatable.)
2. Baking by Dorie Greenspan (The classic -- but better.)
3. Toll House (The classic.)
4. Ad Hoc at Home
5. Joy of Cooking, 1975 (Thin, pale, unimpressive.)
If you have a favorite chocolate chip cookie, Isabel is looking for more recipes to try.
Posted by tipsybaker at 5/12/2010 05:45:00 PM