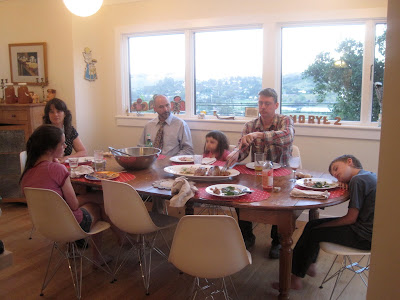 Isabel: "Um, Mom? This is, like, really good meat. Don't say bad things about this dinner just because you thought it was hard to make."
Okay, I won't. And it wasn't actually hard to make. Monday night, my sister brought a salad, and from Ad Hoc at Home I cooked:
-brined pork tenderloin
-scallion potato pancakes
I was initially intimidated by these pancakes because Thomas Keller warns of the difficulties of flipping them. Also, the picture in the book (page 231) makes them look impossibly neat and tricky -- latkes as conceived by a perfectionist jeweler. But my friend Mary said they were easy and great, so I made 'em. These were only the best hash browns I've ever eaten! If you nudge the potato shreds into a square (Mary's suggestion), the pancakes look like they were made by an actual chef. 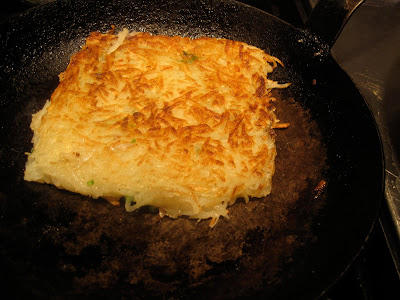 Sort of.  I liked this recipe a lot.
The brined tenderloin had its advocates, most notably Isabel. I can see their point, but remain staunchly indifferent to lean cuts of pig, however well-salted and flavorful. Perhaps this is why I myself am not lean?
Or maybe this is it: For dessert, Isabel and I made glazed buttermilk donuts out of The Craft of Baking by Karen DeMasco. 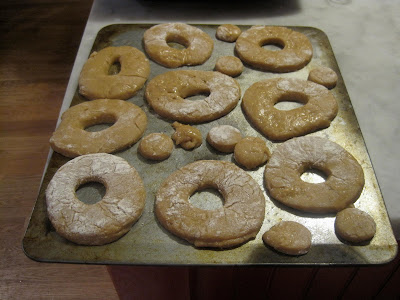 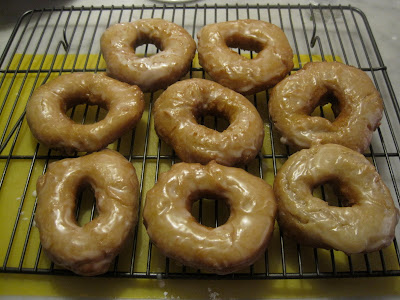 We're on a quest for the perfect homemade donut and while these were yeomanly spice donuts, spice donuts aren't our grail. We didn't know that until we made them. If you love spice donuts, you will probably love these spice donuts.
That was Monday.
Tuesday night, from Ad Hoc:
-marinated skirt steak
-sweet potato chips
My spoiled family couldn't stop complaining about how tough the steak was. That's just the nature of skirt steak. I liked it -- when you have to chew real hard you know you're eating meat.
I fried the sweet potatoes to reuse the oil from the previous night's donut escapade, but wouldn't bother with that recipe again. A bag of Terra chips is just as tasty.
Really, it is no mystery why I'm not lean.
Posted by tipsybaker at 5/05/2010 02:43:00 PM