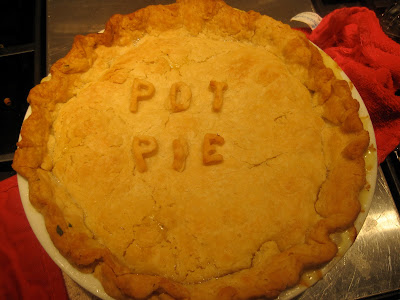 Since both Pioneer Woman and Thomas Keller have published recipes for chicken pot pie, and given they occupy opposite ends of the culinary spectrum,  I thought it would be illuminating to bake their pies and compare. So we held a pot pie party the other night. One Safeway rotisserie chicken yielded enough meat for both pies.
Unsurprisingly, the pot pie from Pioneer Woman Cooks was a breeze to make, as Ree Drummond is all about the breeziness. You saute vegetables (frozen peas, carrots, celery, onion) in butter, toss in some flour, shredded chicken, broth, a bouillon cube, and cream. Briefly simmer, then pour into a pie plate. Pioneer Woman calls for just a top crust, which she makes with flour, shortening, and an egg. I did not enjoy working with this sticky, unwieldy dough  and would not use her crust recipe again.  Total number of pots, bowls, and other cooking vessels PW calls for: 3.
Unsurprisingly, the pot pie from Ad Hoc At Home was painstaking, as Thomas Keller is all about the pains. You blanch vegetables (potatoes, carrots, celery, pearl onions) in four separate saucepans, then make a bechamel that reduces for 40 minutes (an eternity when you're trying to keep milk from boiling over) and requires much subsequent pot-scouring.  The all-butter double crust, however, was very straightforward and user-friendly. That recipe is a keeper. Number of pots and vessels Keller calls for: 10.
For fun, I also heated a bunch of frozen pot pies. 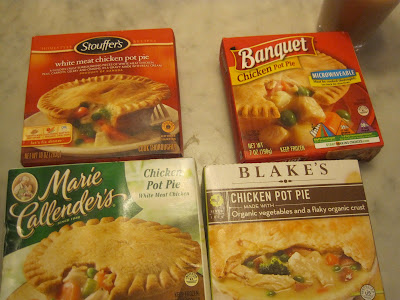 Sadly, I forgot which was which after I took them out of the boxes so we couldn't really rank them, though it hardly matters. My husband and brother-in-law got all misty gazing at the boxes and reminiscing about their bachelor days, but the frozen pies? Universally nasty. In isolation, I'm sure they taste fine, but sampled side-by-side with homemade pies, they were noisome. As Isabel said, "It's like they have water in them."
That sounds weird now, but in the moment, tasting the storebought pies, I knew exactly what she meant. 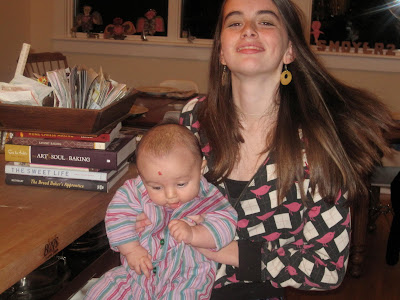 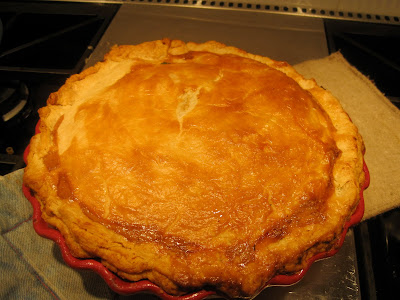 The crust on Thomas Keller's was flaky, almost like a croissant, very buttery. Everyone loved this crust. There was also unanimous agreement that a pot pie needs a bottom crust, which his has and PW's doesn't. The interior of his pie was firm and cohesive so you could actually cut it into neat slices, though some critics thought the filling lacked flavor.
Certainly, by contrast with PW's brashly seasoned pie, Keller's was a bit bland. There was nothing subtle about the flavor of PW's pie, thanks to a bouillon cube, chicken broth, and dried thyme. Whether this was good or bad depends on who you ask. Her pie was also exceedingly runny, called for a ladle rather than a knife. I'll let the tasters speak for themselves:
My mother: "I liked the potatoes in the first one (Keller's), and the crust was unbelievable. But I liked the second one (PW's) very much. They both needed more vegetables."
Justine: "I want the two pies to get married because Thomas Keller crust is fantastic, but I wish it had fewer potatoes and more flavor and was maybe a little runnier."
Fastidious Isabel, gesturing in disgust at the soupy Pioneer Woman pie: "This is why I don't like chicken pot pie!"
Owen had a similar reaction and refused to even touch the PW pie: "You know I don't like soup."
However, the two adult males at the party, both of whom consider themselves pot pie experts, praised Pioneer Woman's pie. 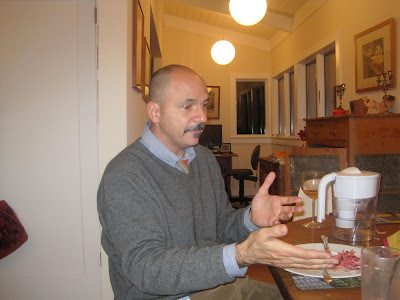 Brother-in-law: "The critical issues with both of these is they're not in individual portions! They're not supposed to be actual pies, they're SUPPOSED to be soup in a crust."
My husband agreed. I don't have any quotes from him because he was to busy shoveling pie into his mouth. You know what word I detest and can't even use except to say how much I detest it? Pie hole.
We held a vote. Keller got four votes, though Justine was a pretty wobbly supporter. Pioneer Woman got two votes, and there was one abstention. Given that he is Thomas Keller, I think this is a win for Pioneer Woman. Or at the very least, a tie.
For the record, I was staunchly in the Keller camp. But I was thinking later how very little I love chicken pot pie, even an elegant Thomas Keller pie that involves ten cooking vessels and a 40-minute bechamel. I'd rather consume empty calories in the form of potstickers, cheeseburgers, BLTs, potato chips, manhattans, or blue Shropshire cheese. I'm just not that into chicken pot pie.
Still, it was a fun party.
Posted by tipsybaker at 3/05/2010 07:13:00 AM