We need a bunker 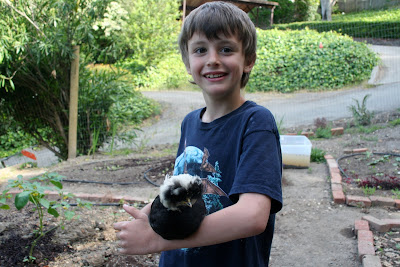 This is a terrible story.
As longtime readers may recall, we used to let our chickens range freely through our fenced yard. But in October a dog broke in and killed five of our hens. After that, we built a protected chicken run where we enclose the birds when we are not around.
Like yesterday. Yesterday, my sister and I took care of business related to the upcoming memorial for our mother. For instance, we bought a casket, paid for the chapel, and went to meet the deacon who will be officiating at the funeral.
We were discussing biblical readings with this nice, grandfatherly man at his office when my cell phone rang. A neighbor reported that two terriers had broken into our yard and somehow penetrated our locked chicken coop.
When I got home shortly thereafter, the police, a representative of the Humane Society, and various appalled neighbors were standing around in our sideshow of a yard. The dogs had been sent home and onlookers had very courteously stuffed the ten -- ten -- dead chickens into bulging Hefty bags. Our favorite chickens all died. Alberta Einstein (see above), whom Owen was going to show at the Marin County Fair in a few months, perished; so did July; so did our two cuckoo Marans. It's a mystery how the terriers got into the coop. The only breach in the perimeter was a strip of chicken wire ripped off an impossibly tiny gap in the elevated main door of the hen house. But then they're tiny dogs. According to onlookers, they showed remarkable teamwork, one of them herding, the other killing. And, of course, the chickens had nowhere to fly, nowhere to hide, stuck as they were in their coop.
We have legal options which I am seriously considering this time. I don't want to be a nasty, vindictive neighbor, but the owners of the dogs broke the law and as a result we lost not just property, but our much loved pets. The dogs didn't dash out and do this while the owner was looking the other direction. According to one neighbor, they'd been running around loose for three hours. They had plenty of time to strategize and storm that coop.
We have a handful of chickens left. When I picked him up after school, Owen wept furiously and said he wants to get more as soon as possible. I loved our chickens, but I'm deeply discouraged and unsure whether I can stand more heartbreak.
Posted by tipsybaker at 3/30/2010 06:39:00 AM