Hanging up the hatchet 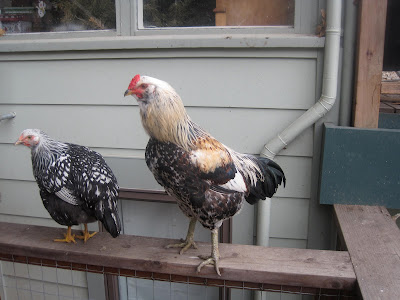 The handsome and burly bird on the right? Our third rooster. The "science" of sexing newborn chicks could use some new talent.
The photograph doesn't do this bird justice. Darlene (I don't choose the names!) has a silky white neck ruff,  his back is splashed with gold and gray, his long tail feathers are an iridescent emerald green, and he's absolutely gorgeous.
But he does rude things to the hens accompanied by violent squawking, which is embarrassing when you're trying to chat with a neighbor. I could live with that, except he also crows for about an hour just before daybreak and therefore, by the law of our suburb, has to go. I'm listening to him crow as I type, just him and the garbage trucks. Someone is going to complain, it's only a matter of time.
I'm done with do-it-yourself culling. The Humane Society says they'll take Darlene, though they can't promise to find him a home. Even if they eventually euthanize him, I assume it will be done via needle, which can only be easier than the messy executions meted out to Floppy and Arlene.
Anyway, they do have some success pushing the roosters, so fingers crossed.
Posted by tipsybaker at 2/04/2010 05:53:00 AM