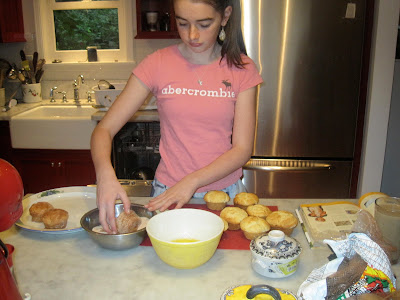 Here's a surprise: Muffins are even better when you dunk them in a half pound of melted butter and roll them in sugar.
The Pioneer Woman calls these French breakfast puffs, but they did not strike me as very French. They struck me as very American. Also, very delicious. If you're interested, this is one of the recipes that appears in both the Pioneer Woman's cookbook and on her web site.
First, you make a fluffy, sweet, nutmeggy muffin. PW calls for shortening, which somehow seems nastier in a muffin than in a pie crust, but since I had a tub in the refrigerator, I used it. Pale, puffy muffins emerged from the oven 25 minutes later.
I thought that a half pound of butter (Pioneer Woman calls for salted butter) was more than we needed for dunking the muffins, but Isabel ran out before the last two muffins were coated. You don't just dip the crowns in the butter, you drench the whole muffin. 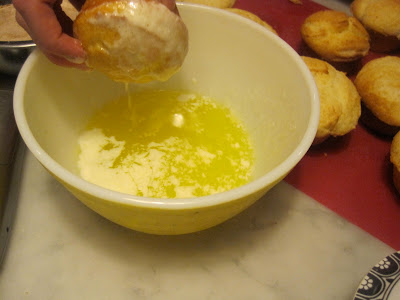 This meant that there were two sticks of butter coating 10 muffins, which is about 1 1/2 tablespoons of butter per muffin. Is that a lot? How much butter do people who butter muffins put on their muffins?
After buttering, we rolled the damp muffins in cinnamon sugar. 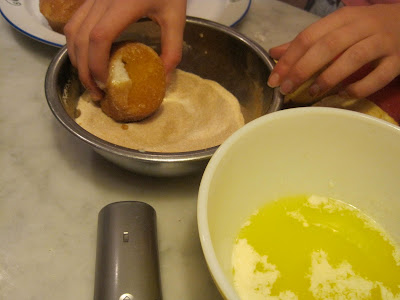 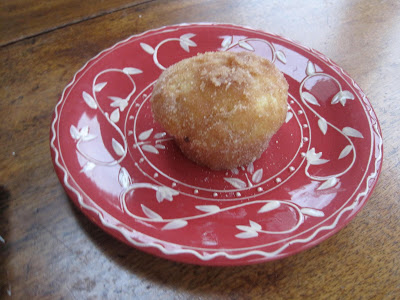 "Cinnamony sweet perfection!" gushes the Pioneer Woman. "The deliciousness of these beauties is not to be underestimated." One of the mysteries of Pioneer Woman is how she manages to be both immodest and charming at the same time, which she does.
At any rate, we all agreed with her -- cinnamony sweet perfection! All except Owen.
"Tastes like a donut," said Owen. Then: "No offense, but it's a little too sugary and you can taste salt in there."
He was responding, I think, to the salted butter. I told him he's crazy, that salt, sugar and fat are the qualities we look for in a food, and that when he gets the whole trifecta in a single dish he should rejoice, and that he should never say "no offense" because just those two words are offensive.
I didn't really say that. I don't think I said anything. This morning I offered to toast one of yesterday's leftover puffs for breakfast, but he declined. He wants pancakes, so I am now going to make Pioneer Woman's pancakes. They appear to consist mostly of sour cream.
Posted by tipsybaker at 2/27/2010 07:41:00 AM