Again I am wrong about something 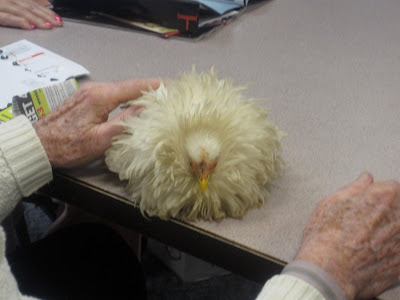 This is the tiny frizzle hen that inspired me to buy Owen a frizzle hen last fall. Owen's black frizzle was ugly, miserable, and cantankerous and a rogue dog killed her a few weeks after we brought her home, which was almost sadder than if she'd been nice.  This one looks like a fluffy chrysanthemum with a little chick face sticking out, and she's very sweet.
I had misgivings about yesterday's 4-H visit to the retirement home because it struck me as patronizing. Just because people are old, doesn't mean they want to sit around and watch show-and-tell with scraggly barnyard animals.
Oh, but they did. I was so wrong. When the 4-H club arrived, there were about 20 people waiting in the lounge, pumped for the show, wheelchairs drawn up to formica tables. 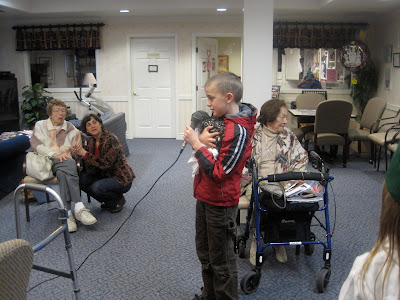 Each of the kids made a brief (or, in Owen's case, meandering) presentation, and then brought their animal around for residents to meet and admire. 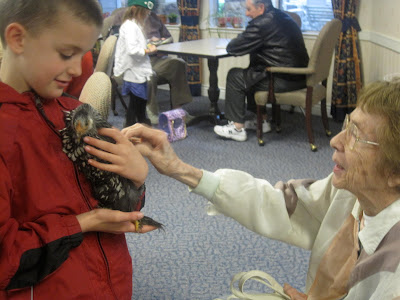 It went on for about an hour, and by the end the kids were no longer shy, everyone was chatting, the animals were running around, and there were a few moderately amusing mishaps. I don't want to get corny about the healing power of animals/the rightness of generational mixing, but it was an unexpectedly lovely afternoon. 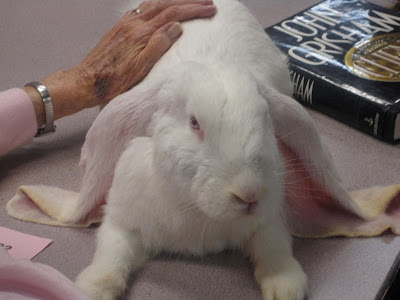