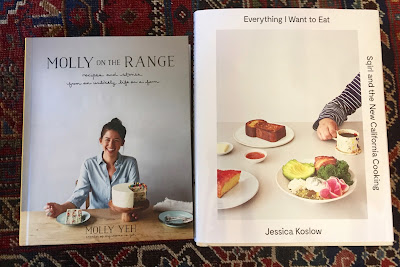 It is always a good idea to share your first impressions of cookbooks so you’re on record with opinions you will later need to take back, like how a few years ago I announced how much I hated Gabrielle Hamilton’s Prune only to realize shortly thereafter that it was a masterwork, one of the great, spiky, original cookbooks of all time.

A couple of hot new cookbooks arrived the other night and here are my thoughts after spending an hour or so looking through them.

Molly on the Range by Molly Yeh

In case you do not know already, Molly Yeh is a gorgeous, exuberant, and very young food blogger who once studied percussion at Juilliard and now lives with her adorable husband on his family farm in North Dakota where she bakes a lot of really tall, really cute, cakes. She is immensely popular. Popular as in 172,000 Instagram followers. She doesn’t use capital letters, she’s always smiling, and everything she photographs looks dreamy.

That sounds insufferable, but somehow isn’t. She’s just too bubbly and happy to be insufferable.

Yeh’s first book is, at first glance, charming. I have not read all the stories about her life and I’m not sure I will, but I love the look of these recipes. Yeh likes to pile a lot of delicious things into a dish. You could call these “embarrassment of riches” recipes. Walnut crusted brie mac and cheese with apples and pancetta. Dark chocolate marzipan scone loaf. Scallion pancake challah. Butter and salami pizza. Tahini blondie ice cream sandwiches. What could be better than a steamed Chinese bun? A steamed Chinese bun folded around crispy schnitzel. What could be better than that? A steamed Chinese bun folded around crispy schnitzel with Sriracha mayonnaise.

I’m not Molly Yeh’s perfect reader. I’m too old. Will I soon find myself smiling indulgently and patiently and mailing this book to Isabel?

Only time will tell.

Everything I Want to Eat by Jessica Koslow (a.k.a. the Sqirl cookbook)

Jessica Koslow is not quite as young as Molly Yeh, but she’s pretty darn young. She owns the exquisite little Los Angeles restaurant Sqirl where I once ate a very nice breakfast, some kind of crunchy savory rice dish the details of which are vague but the overall wholesome goodness of which remains vivid. Her book is harder to warm to than Yeh’s, more serious, edgy, modern arty. I find the design a bit off-putting, the unsmiling faces of striking or semi-famous people who stare out from the photographs disconcerting, like I just arrived at a party where everyone is cooler than I am. 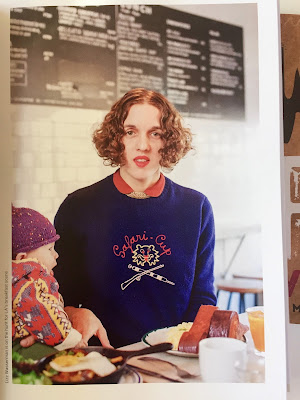 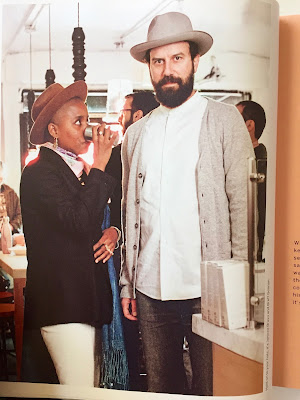 I’ll get over that.

Where Yeh tries to pack as many crowd-pleasing ingredients into a single dish as she can, Koslow is more apt to pair the pleasant with the not-so-pleasant. Koslow will often emphasize something slightly “scary” about a dish, be that a color or an ingredient, something that will turn some people off (like my husband), but excite and challenge others. Beet-cured salmon. Kohlrabi tzatziki. Stinging nettle cavatelli. Black cod ceviche with purple yam. Carrot ginger black sesame loaf. Just the colors in the names of those last two dishes would make Mark anxious.

I don’t want to overstate this tendency. You might not even notice it if you hadn’t just been romping around in the marzipan fairyland of Molly on the Range.

Based on my lukewarm first impression, I will probably end up cherishing Koslow’s book. The cookbooks (and people) I end up loving the most are the ones I have trouble with at first.

And in Korean cooking news, japchae, the classic slippery dish of sweet potato noodles with meat and vegetables was a giant hit. Owen went crazy for it and asked me to make it again and so I shall. Leftovers reheated beautifully in a skillet. I used Maangchi’s recipe from her book, but the version on the blog is not all that different. Just double it. I skipped the egg. Highly recommend.
Posted by tipsybaker at 10/06/2016 03:09:00 PM

Labels: maangchi, molly on the range, sqirl
Email ThisBlogThis!Share to TwitterShare to FacebookShare to Pinterest