A birthday, Spam burritos, acorn jelly, and other good stuff

What happened to the Korean food, you ask?

In reverse chronological order, here’s what I’ve been up to for the last few weeks. Some food in there, not that much.

Owen turned 16 a couple days ago. He did not want bulgogi or japchae so we went out for pizza. Gifts he received: the Everybody Wants Some! soundtrack, a vintage Dolly Parton album, a venus flytrap, The Wide Sargasso Sea, a notebook, an amazon gift card, The Dude and the Zen Master, and an Indonesia guidebook. 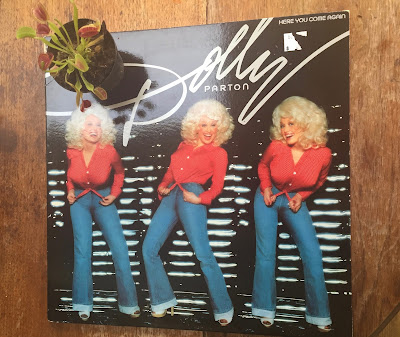 That somewhat reflects the range of Owen’s enthusiasms -- and in the case of a couple of those gifts, what his parents hope will become his enthusiasms.

At 16, Owen has a lot of fine qualities, but above all, he is a creature of passionate enthusiasms. The enthusiasms constantly rotate, but currently include ABBA, comic books, cosplay, Goats of Anarchy, his plants, Kenny Rogers, our cats, building sets for school theater productions, The Big Lebowski, cereal, and computer games. When Owen loves something he loves it ardently and learns everything about it. In the car the other day I was treated to a long, almost scholarly lecture about the artistry of ABBA, including meditations on the voices of Frida and Agnetha  (Owen prefers Frida’s voice which is more “majestic”), the way the group’s sunny early albums gave way to darker works culminating in their brooding masterpiece The Visitors and a sadly unreleased final album. The disquisition lasted 25 minutes and I enjoyed every minute of it, although I think it’s time he choose a new band as he appears to have sucked ABBA dry. Plus, his father can barely stand to hear the word “ABBA” let alone their music and would be pleased if Owen moved on to something he can relate to, like Led Zeppelin.

I think Dolly Parton is a better bet, a shorter leap.

It’s a surprisingly rare gift, the capacity for great enthusiasm. But it is not a gift that people automatically envy or admire or even recognize as a gift. Brains, athleticism, charisma, beauty -- they all seem so much more important when you’re a kid. In the long run, though, I would argue that a capacity for enthusiasm is every bit as valuable, maybe more. Life is richer when you can really get into things. There’s always something coming around the corner to absorb you, to  keep the world sparkling. It’s how I get by, anyway.

If it sounds like I just suggested that Owen is enthusiastic but otherwise a loser, that is not what I meant at all! He has a lot of abilities, I just meant that to his mother, in 2016, it is his gift for enthusiasm that seems most likely to stand him in good stead throughout his hopefully long and happy life.

Moving on. What happened before the birthday?

I have nothing original to say about the election so I’ll say nothing, although like everyone I know I’m obsessed and can not wait for it to be over.

Before the debate, I was on a reporting trip for a magazine and my father came along for the ride. For five days we drove around the American Southwest talking, eating, staying in some wonderfully bad old motels and looking at 12th-century Puebloan cliff dwellings. It was a beautiful experience, but I will be writing about it elsewhere so should keep my powder dry, as they say.

Some culinary highlights: I ordered Navajo tacos everywhere I went. Hot fry bread topped with meat (ground beef, chicken, pulled pork), beans, shredded cheese, lettuce and anything else the cook wants to throw on there. My father cringes at the word “fry” and refused to even taste a Navajo taco, preferring to stick with regional specialties like the turkey wrap and soup of the day. It was sad that he didn’t get to experience the pleasure of a Navajo taco and it is also sad that I will probably be dead before I reach his age. 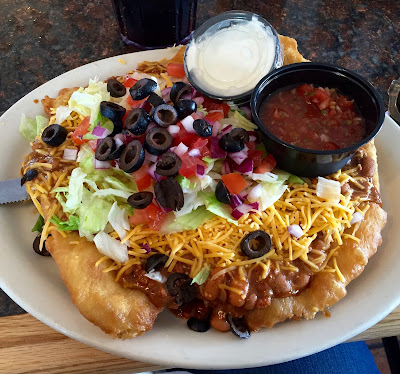 But wait! I did get him to try a roast mutton taco. By the side of the road in Shiprock, New Mexico  a bunch of people had set up little tents with portable stoves and were advertising tacos filled with pork chop or roast mutton.  I said, “Let’s split one.” My father said, “Please just do me a favor, no mutton. And a regular tortilla, not fry bread.”

Obviously, I could not honor that request. We watched the woman at the stand of our choice stretch a ball of pale dough into a disc, drop it into bubbling oil, pluck it out with tongs a minute later, wrap this hot, golden bread around some strips of dark, super-tough, savory mutton and slather it all with fresh green chile sauce. I took one bite of this delicious thing, handed it to my father, and the next time I looked over he had finished it.
I thought I’d finally loosened his corset, but no. The next morning we stopped at a gas station and noticed a line of cars idling, hand-written menus affixed to the windows. They were selling Navajo breakfast burritos. To my father’s horror, I bought a Spam burrito, a steaming bundle of
mashed potatoes and crumbled ham wrapped in flour tortilla. I know how disagreeable that sounds if you think you hate Spam, as I used to, but it was very satisfying.  My father declined to even taste it. I guess some of you are probably with him on this one. Wimps.

And now we have finally traveled back far enough in time to get to some Korean food that I served before the trip to the Southwest.
The most interesting dish I made was the acorn jelly salad from Robin Ha’s  Cook Korean! You mix acorn powder with water, pour into a brownie pan, and chill until it sets into a firm jelly that has a mild, earthy flavor. You slice up this jelly and add it to a salad of cucumbers, lettuce, and lovely soy sauce dressing. I told Owen the strips of acorn jelly were noodles and tried to think of them as noodles myself, because what are noodles but starch and liquid?

But it didn’t quite work, the noodle trick. Acorn jelly isn’t exactly an acquired taste, it’s more of an acquired texture — cold, damp, slippery and strange to a Western palate. It wasn’t bad, but I will have to nurture my appreciation of acorn jelly.

I also made some superb spicy ribs from Koreatown, the appreciation of which required no nurturing, and a very enjoyable kimchi fried rice from Cook Korean!

Before that. . . well, I think I’m all caught up.  Sorry for the long absence.