Korean persimmon tea is simmering on the stove as I type and the whole house smells like cinnamon and ginger. Very cozy and autumnal.

*Seaweed salad, also from Cook Korean! You rehydrate dried seaweed, mix with julienned cucumber and carrot, dress with a sugary, vinegary dressing, and eat. Or don’t eat. This recipe does not yield the dainty, finely shredded seaweed salad you’ll find at sushi restaurants, but a salad with biggish, dark, slippery leaves. (Though obviously you could go ahead and shred the seaweed.) I liked it. Mark: “It doesn’t look good, it doesn’t taste good. I think I might have fatigue from challenging meals.”

*Spicy rice cakes. I’ve tried two recipes for Korean spicy rice cakes now, Maangchi’s and Robin Ha’s. They look almost identical, but Maangchi’s recipe is more precise and better.* The dish consists of wonderfully chewy cylindrical rice cakes cooked in a light, easy fish broth and spiced exuberantly with red pepper flakes and gochujang. Traditionally, it calls for fish cake but I have learned that I don’t like Korean fish cake, which is flat, with the texture of fabric. So for my second try at spicy rice cakes I omitted the fish cake and fried a half pound ground pork, salted it, and folded it in to the rice cakes at the end. Ravishing. Those are the changes I made to the recipe here. (Although Maangchi says otherwise in her headnote, you could use chicken stock if you are not prepared to track down dried anchovies and kelp. However, keep in mind that both ingredients are readily available at Asian markets and the broth could not be easier to make.) 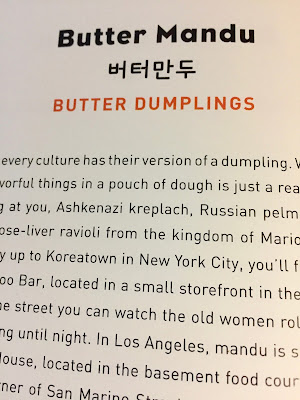 *Butter dumplings from Koreatown by Deuki Hong and Matt Rodbard. So outlandish I had to try this recipe which you’ll find along with a little backstory here. This is basically the standard formula for Chinese and Korean dumplings except that in addition to ground pork, cabbage, ginger, and garlic, it calls for a pound of butter.

You read that right, friends. A pound of butter. Hardcore.

You knead that pound of softened butter into the meat the best you can and stuff your dumplings. Some of the butter leaked out in the cooking, but there was plenty left inside the dumplings and you could see it and taste it. I watched the butter run down Owen’s chin after he bit into a dumpling and there was congealed butter on the plates when I went to put them in the dishwasher. Yes, it freaked me out. The dumplings were buttery and delicious, but not delicious enough to outweigh my qualms. Fun. Never again.

I have to take a short break from cooking Korean food this coming week, given that both Mark and Owen are rebelling. But I’ll be back to it soon.

On another subject, I’ve seen lots of great movies in the last few weeks, thanks in part to the Mill Valley Film Festival. A couple of these haven’t opened yet, but here are my recommendations, both whole-hearted and qualified:

American Honey, directed by Andrea Arnold, got under my in in big way.  It’s about a crew of kids who drive around the country selling magazines, drinking mezcal, falling in love, getting in trucks and convertibles with strangers, dumpster diving, and other good stuff. It’s long and meandering and I can see all its flaws but I could have sat there all day watching the story, such as it is, unfold, and listening to the music. It was like being inside a strange yet mysteriously familiar dream.

Christine, about a Florida newscaster who shot herself on air in 1974 just before her thirtieth birthday, was like being inside a strange yet grimly familiar nightmare. The nightmare of those rancid moments/days/weeks in your life when you couldn’t seem to do anything right, when you were at war with yourself and your mother and the world and increasingly sure that nothing good — not professional success, not love, not peace of mind — was in your future. (If you have no idea what I'm talking about, count your blessings!) The film featured an incredible lead performance by Rebecca Hall and was the most deeply unpleasant good movie I’ve seen in recent weeks with the possible exception of A Quiet Passion.

You probably know that Emily Dickinson had a hard life but if you didn’t A Quiet Passion will fill you in on all the sad details, from the romantic frustrations to the seizures. (It also shows the rapturous joy Dickinson took in her work, which she did in the wee hours of the morning, by candlelight, before the rest of her family got out of bed.) Like Christine, it features a powerful performance from a lead actress, in this case Cynthia Nixon. Like Christine is its wrenching to watch. If you have a robust appetite for harrowing movies, see both of these films. If you have a limited appetite, just see Quiet Passion. If you have no appetite skip these two and go see Paterson, about a sweet-natured New Jersey poet/bus driver who finds grace in everyday life. Paterson, set in Paterson, New Jersey, is lovely, offbeat, and droll. Fans of Adam Driver will want to see this for sure, as will fans of William Carlos Williams.

Another lovely movie: California Typewriter, a documentary about a typewriter shop in Berkeley, California and the universe of typewriter enthusiasts, which includes Tom Hanks and Sam Shepard and a lot of delightful weirdos. I dragged Owen to this one and I was pretty sure I was going to have to do something nice to make it up to him afterwards, but we both loved it. We both want a typewriter now.

Everyone I know who’s seen Certain Women thought it was boring but, as with American Honey, I wouldn’t have minded if this film, which stars Laura Dern and Michelle Williams, had lasted all day. It tells the stories of three women dealing with crushes, careers, and construction projects in wintry Montana and I concede, it was kind of boring. For me, it was the right kind of boring.

Not at all boring: Moonlight. As all the reviews have argued, this movie about a sensitive black kid growing up in the projects, is brilliant. If you think you might have trouble getting inside the head and tender heart of a silent, muscle-bound drug dealer with gold grillz and a do-rag, you haven’t seen Moonlight. You should. The Terry Gross interview with the writer and director was fascinating.