Doable on a weeknight 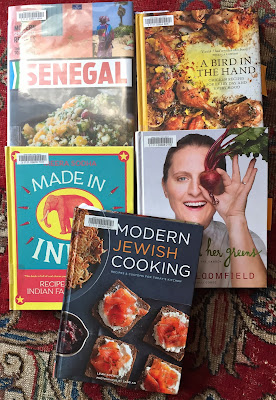 But let's talk about another vitally important contest instead: The Piglet, the always-contentious annual tournament of cookbooks at Food52.

As ever, they chose a wonderfully eclectic bunch of cookbooks for consideration, works covering the cuisines of Oman, Ukraine, Israel, India, and Senegal, along with a collection of chicken recipes, a baking book, and more. They also selected a fairly eclectic group of judges with the usual complement that doesn’t care about cooking and whose clueless misadventures outrage the vocal subset of Food52 readers that wants substantive criticism. These readers sound off in the comments, this year prompting Food52 editors to write a long, defensive, probably ill-advised post to which readers sounded off in the comments. . .

And then blogger Phyllis Grant went and did everything right on Tuesday in her terrific review of J. Kenji Lopez-Alt’s Food Lab and Michael Solomonov’s Zahav. Grant cooked the hell out of her assigned books and made the case to advance Food Lab with passion, wit, and earned authority. Yesterday, chef Yotam Ottologenhi followed up with a sturdy little essay weighing the relative merits of Lesley Tellez’s Eat Mexico and Hot Bread Kitchen (which won and which I must acquire asap). Today, Sadie Stein put forth a persuasive argument that Made in India is a better choice for the home cook than Gjelina.

The readers of Food52 appear to be satisfied these recent judges. I am satisfied, though I have no idea if I agree with their judgments. Other than Zahav (love) and Ruth Reichl's My Kitchen Year (like), I've barely touched the Piglet books. In some cases, I haven't even seen the Piglet books. I did a big library run the other day and have since enjoyed a cup of fine masala chai from Made in India and a some anti-inflammatory turmeric tea from Heidi Swanson's Near and Far. I was all ready to mock that turmeric tea, which sounded like a revolting witch's brew of turmeric, honey, black pepper, and coconut oil. But it was a tangy, delicious elixir and instead of making fun of it, I made a second cup.

I've also produced a beautiful chicken soup with dumplings from Mamushka, a seductive collection of Ukrainian dishes. More about this in a subsequent post. 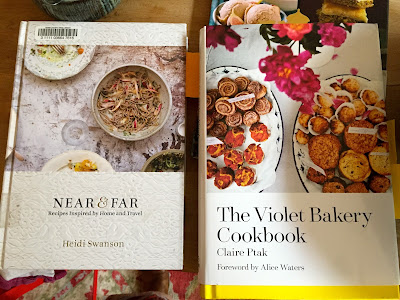 But the Piglet book I've really dug into is Leah Koenig's Modern Jewish Cooking. The sad fact is that while it appeared at first glance to be the blandest, most generic book of the bunch, it was also the most approachable. It's not that the other books are unapproachable, exactly, but as reviewers Claire Mazur and Erica Cerulo put it in their critique, the dishes in Modern Jewish Cooking seem "doable on a weeknight."  I am pretty sure this is one of the main reasons they preferred Modern Jewish Cooking to the patently more original Mamushka. And I have a feeling that judgment was a mistake. But who am I to criticize? "Doable on a weeknight" is powerful when you're lazy or tired or busy, and aren't we all.

So, the book. In her introduction, Koenig tells the story of the genesis of Modern Jewish Cooking: As a young adult living in Brooklyn, she decided to teach herself to cook the traditional Jewish foods she grew up with. She mastered borscht, bagels, and blintzes. Eventually, she began to experiment, putting her own contemporary spin on classic fare, adding jalapeno to her matzoh balls and pumpkin to her challah. The book is a compendium of these updated recipes, along with a lot of sundry dishes that I'd never peg as Jewish (and for which I have hundreds of recipes on my shelves already), like a mushroom-goat cheese tart, roasted broccoli, a wedge salad, granola.


I would like to say that despite my initial indifference I've fallen passionately in love with Modern Jewish Cooking, but I can't. It's been a weeklong marriage of convenience. Don't get me wrong, Koenig has written a very smart, attractive cookbook. But I don't daydream about it when we're apart. I think the right audience for her book is a millennial novice cook who is trying dream up hip Shabbat menus. That isn't me.

I made both of Koenig’s oat granolas (apple and honey, black pepper and pistachio) and while both were fine, neither was as good as Alton Brown's. I baked Koenig’s tender honey-cinnamon cake, which was easy and lovely, but not quite thrilling enough for the scrapbook. The other night I served Koenig’s rosemary-maple roast chicken with a side of her toasted almond Israeli couscous. The chicken was great -- juicy and sweet -- but I have roasted so many great chickens that I can't get excited about a new roast chicken recipe, however great. The Israeli couscous made a pleasantly innocuous starchy side and I’ll forget I ever made it in a few days.

Ah, but here's how it works: I was all set to do something more exotic from one of the other Piglet books last night, like a curry from Made in India for which I had already bought all the ingredients, but I was busy and tired and at 6:30 pm decided I'd throw together a ridiculously easy Koenig cottage cheese-noodle dish instead. You cook some shallots in butter while boiling egg noodles. Mix the two in a big bowl with some cottage cheese, sour cream, and herbs. (The recipe calls for mint, but I used dill.) Per Koenig's instructions, I served this with a green salad. Perfect, not-that-nutritious dinner. I could eat it every night.

And yet even now, even after that satisfying, miraculously simple meal, I still don't feel a romantic spark with this cookbook.
Posted by tipsybaker at 3/03/2016 10:04:00 AM