I had to turn in an essay for the class I’m taking right around the time the Piglet got interesting and since I couldn’t simultaneously finish the essay and stalk the Piglet, I let the Piglet drop.

If were paid to write this blog, I’d have been fired by now. Or, as Donald Trump might tweet: "She should be fired! Lightweight blog that no one reads anymore. SO SAD!"

A perfectly respectable book won the Piglet. Not the book I would have chosen, but Hot Bread Kitchen is a perfectly respectable book that I haven’t yet mustered the energy to cook from because, as the title suggests, it's mostly bread and I haven't been in a bread-making mood. Of the books I got to know during the tournament, I really liked Zahav, of course, and Meera Sodha's Made in India, but I ended up falling hardest for The Food of Oman by Felicia Campbell. Initially, I was just fascinated by the obscurity of the topic. Later, I was happily surprised by the workability and deliciousness of the recipes. I expected Omani fare to be standard Middle Eastern, but it’s not, as anyone with a solid grasp of geography might have guessed. Oman is closer to India than to Egypt and you can taste that in these dishes, which are spicy and rich with coconut milk.

So far, I’ve made Campbell's caramelized beef, which involves cooking cubed chuck steak in a pot with spices, onions, cilantro, and water and for hours until the strong flavors have become one with the super-tender meat. I served this with a big pot of coconut spinach and pillowy, slightly sweet, sopapilla-like cardamom fry breads.  I’ve made those fry breads twice more since then, that’s how much I liked them. Some pan-seared meat dumplings were delicious as well, a zesty beef and onion mixture encased in a sticky, chewy dough, like curry potstickers. Only the soupy Omani coconut curry chicken has disappointed.

The weather has turned fresh and springy over the last week and Omani food is dark and serious. On Monday, I tried to figure out what I wanted to cook next from Food of Oman. The answer was, nothing. It's all too heavy for this time of year. I flipped through Hot Bread Kitchen. Nothing. I thought about Mamushka. Not feeling that either. I wanted something else entirely. But what? I browsed my shelves and when I got to the Nigella Lawson section, I stopped. Nigella. It was time for some Nigella.

What a good call that was. You could live a long and happy food life cooking only from Nigella Lawson's oeuvre. She’s funny, smart, and charming. Her recipes are fabulous and easy. I’m now going to link you to four of them. You are most welcome.

Monday night, I made salmon with mirin from Nigella Express (her “fast” cookbook). You mix soy sauce, mirin, and brown sugar in equal parts, marinate your salmon fillets for a couple of minutes, fry two minutes on one side in a dry skillet, flip, pour over the marinade, cook two minutes more. Remove fish, add a splash of rice vinegar to the pan, pour sauce over fish. Divine. Owen uttered words that have never before crossed his lips. “Is there any more salmon?”

That night I also served a lovely strawberry crumble that Nigella promised would render bland, watery supermarket strawberries palatable. It did. Recipe for the easy, irresistible crumble is found in Nigella Kitchen (her "catch-all" cookbook) and here.

Tuesday night, I served so-called meatzza from Nigellisima (her Italian book), which is pizza, but with a crust of seasoned ground meat, not bread.
I hate the name, but that's the only downside to this simple dish. It's perfect for all you gluten-free, low-carb eaters and pretty damn great for the rest of us. Recipe here. Use a pound of ground beef, a 15-ounce can tomatoes, and 6 ounces mozzarella. She doesn’t specify the quantity of salt, which I resent in a ground meat recipe like this one as I had to cook several tiny meatballs to get the seasoning just right. A heaping 1 1/2 teaspoons of Diamond Crystal kosher salt did the trick.

Finally, last night I served another killer Nigella dish, the broccoli-stilton soup from Nigella Express. I've made it before and written about it before, but I doubt anyone remembers. Ten minutes of "active" time to make this soup. Frozen broccoli! Love. Try it.
Now, some books that have nothing to do with food:

I read this haunting and lovely novel by the author of Olive Kitteridge in two hours and so can you. So should you. It's about the secret childhood histories we carry around with us that no one in our adult lives can ever really understand. The details of the story are highly particular to narrator Lucy Barton’s troubled family of origin and yet almost made me cry in the ways (good ways) it reminded me of my own not-so-troubled family of origin. 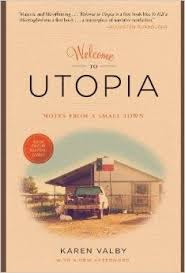 This book by a former colleague of mine is a thoughtful, big-hearted, and candid non-fiction portrait of life in a small Texas town. Karen Valby gets to know restless high school students who drive hours to the nearest movie theater and conservative older gentlemen who convene pre-dawn every day to drink coffee in the general store. There are towns like this all across America, but I sure don't live in one. I enjoyed getting out for a bit and meeting people I otherwise wouldn't. Highly recommend. 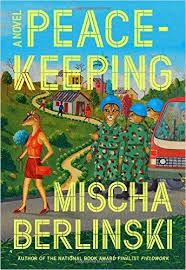 Peacekeeping deals with politics, intrigue, and Americans in Haiti. Mischa Berlinski is a superb writer and his novel started out strong. But page by page my interest seeped away. I got to page 265 and gave up with only a hundred pages to go. I just didn’t believe the story or care what happened anymore, and that’s a big shame because the book has a lot going for it. This review pinpoints the problems, I think.