Sorry for my absence. I was busy turning fifty.


Mark took Owen and me to Paris for a few days to celebrate this milestone. It was cold and gray and expensive and beautiful. There were police and soldiers everywhere. We saw the actor who plays Carl on the Walking Dead in the Mona Lisa room at the Louvre. We saw Mrs. Roman Polanski outside Cafe Flore. From the cheapest seats in the house, we saw a ballet choreographed by Mr. Natalie Portman. What else? French women do get fat. So do French men, even though a lot of them smoke. Everyone was wearing coats, but the fashions were still fun to study. Ladies, if you want to look Parisian, quit combing your hair so much and never set foot in Lulu Lemon again. Just do the messiest ponytail you can manage and buy lots of scarves, black tights, and boots. But above all, no yoga pants in public, ever.

I like this artful little video of Owen and me on the Metro:


It captures one dynamic of the trip in 7 seconds.

So much as been written about French cooking it's hard to have an original thought. This may not be an original thought, but I fell in love with the simplicity and deliciousness of French salads. The three or four salads I ate there involved big leaves of lettuce of a single variety, not those scrappy mixed greens we favor here. I can’t remember the last time I ate an American salad that didn’t consist of wisps of baby arugula, baby spinach, baby mizuna, baby oak leaf, etc. Fully-developed leaves from an adult head. That’s the salad I want at fifty.


I'm happy to be fifty, by the way. You have to understand, I’ve been bracing for fifty for the last three years and now I can stop. Now I can relax and settle in. The late forties are so ambiguous. Fifty isn't.

Recently, this acclaimed novel came in for me at the library and I took a short break from War and Peace to tear through it: 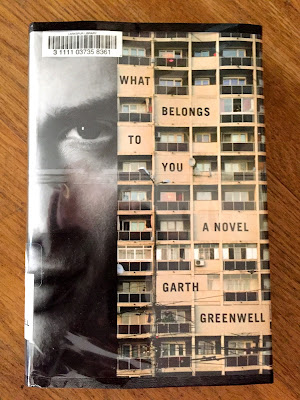 It's about an English teacher in Bulgaria and his unrequited love for the male hustler he meets in a public men's room who gives him syphilis.

Yes, I just made that sounds as unappealing as I possibly could, but think of it this way: A book has to be really, really good to overcome subject matter like that and What Belongs To You absolutely does. If you don’t believe me, believe Dwight Garner ("incandescent") and James Wood ("brilliantly self aware.")

I mention this book because at one point, the narrator meets a woman whom he describes like this: "She wasn't a young woman, but there was a sense of vitality about her that made me think of the Bulgarian phrase zryala vuzrast, ripe age, which they use for the period of time before one is truly old. She was large, but she carried her weight like a sign of health, her frame softened by well-being."

Next post: the 2016 Piglet. I warn you, I'm not engaged like I have been in years past, but I did get as many of the competition books out of the library as I could. It's a very interesting mix. I've never eaten, let alone cooked, food from Oman, Ukraine, or Senegal. But within the week. . .