Since last I wrote, Isabel went to Chicago with her friend’s church, did good works, returned, and enrolled in a summer dance program. Owen graduated from 8th grade, got a smart phone, had all his baby teeth pulled, and is now at a camp in Massachusetts where I installed him on Saturday. I put sheets on the bed, explained how to do laundry (glazed eyes, not going to happen), bought him a fan, stocked the bureau with a few dozen homemade Chips Ahoy and Biscoff cookies (from Jennifer Steinhauer's Treat Yourself), and chatted with the counselors while he pretended not to know me. Who is this weird lady who’s trying to hug me? Thank God she’s leaving! Perhaps she’s homeless. So sad.

I stayed with Mark’s parents at their home in Cambridge while getting Owen settled. Cambridge = gorgeous and exotic to a Westerner like me. Every time I went outside there were people sculling on the river and the New England architecture and foliage remain mysterious and fascinating. Hostas? Never seen them in California. No clay tennis courts or old colonial houses either, and no Dunkin' Donuts, though apparently that's about to change.

The short trip helped me decide which cookbooks to explore next.

Someone had given my mother-in-law, Mary, a few slices of a simple, elegant chocolate tart made from a recipe in Joanne Chang's book Flour. She cut the slices into slivers and we all got a tiny piece for dessert one night. That tart was sublime. I plan to replicate it today or tomorrow and decided this is the moment to "do" the Flour cookbook. Five to ten recipes, no more, no less.

Because Flour contains few savory dishes, I'm also going to be doing Blue Ginger by Ming Tsai, a long-ago gift from my father-in-law. Again, five to ten recipes, no more, no less.

Have you heard of Blue Ginger? It's the name not just of Tsai's cookbook, but of his celebrated Wellesley, Mass., restaurant. I've been wanting to eat there ever since I read a New Yorker profile of Tsai many years ago and have schemed to do so practically every summer that we've gone back to visit Mark's family. To no avail. Sunday, though, the stars finally aligned. Owen was launched at camp and my father-in-law wanted to watch the World Cup and shout at the TV, so Mary and I drove out to Wellesley to dine at Blue Ginger.

Given its glowing reputation and high prices, I expected glamour, but Blue Ginger is casual, situated on a placid suburban street next door to a saddle shop. There were many tempting items on the menu, like a Korean-style fried chicken, but I'd decided in advance that I needed to try Tsai's famous miso-marinated sablefish. It did not disappoint. The white fish separated into big, sweet, tender flakes reminiscent of Nobu's legendary miso-marinated black cod. In fact, I began to wonder if it wasn't identical to Nobu's legendary miso-marinated black cod. According to wikipedia, sablefish and black cod are the same animal and I couldn't detect any difference in the flavoring. Later, I found Tsai's recipe and it's not quite identical to Nobu's, but it's pretty damn close. I guess you could call it a clone.

Anyway, it was fabulous. But there was a problem. 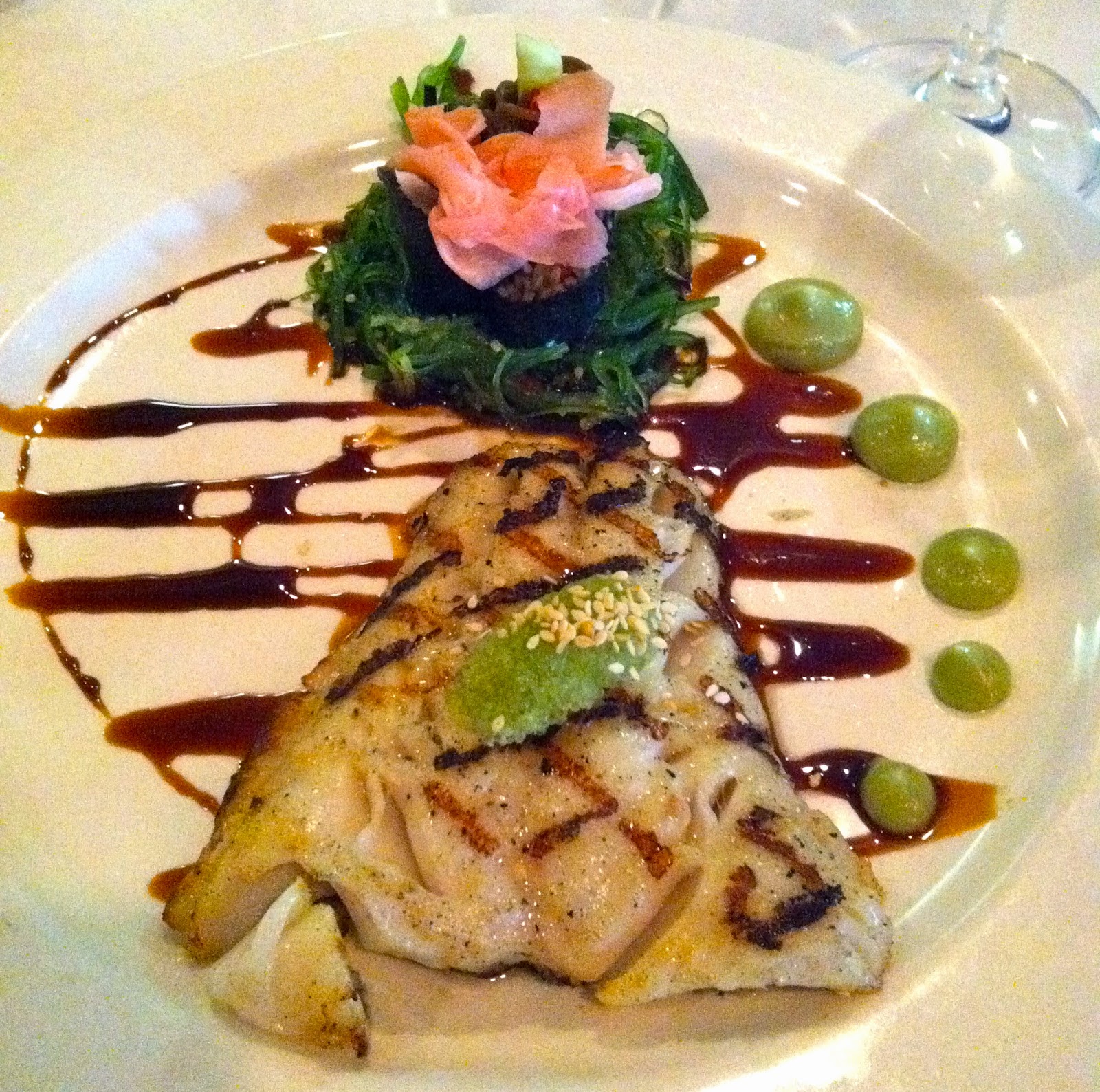 It was too easy to eat! With a steak or pork chop the same size, you'd be salting, cutting, and chewing for half an hour. Eating this soft, sweet fish was about as challenging as spooning up some custard. A knife wasn't required, and probably not even teeth. Meanwhile, Mary had ordered a dish that contained roughly a pound of noodles plus a busy curry sauce and various interesting crispy and crunchy garnishes. I'm not a fast eater, but I dispatched with my fish in about four minutes and proceeded to consume every crumb of bread in the basket while Mary tried to make a dent in that mountain of noodles. She didn't come close and left with a giant box of leftovers.

We both agreed that this was a real glitch in our otherwise excellent dining experience. Life is very hard.

I flew home last night to discover that someone who shall remain nameless had left the gate open and our goats had spent a few hours in the part of the yard where beautiful things  -- bougainvillea, roses, Shasta daisies, two young princess trees, pelargoniums, grapes -- had lately been growing. Not anymore. Gone. Like they were never there. It will be a few days before I can speak of this with composure.