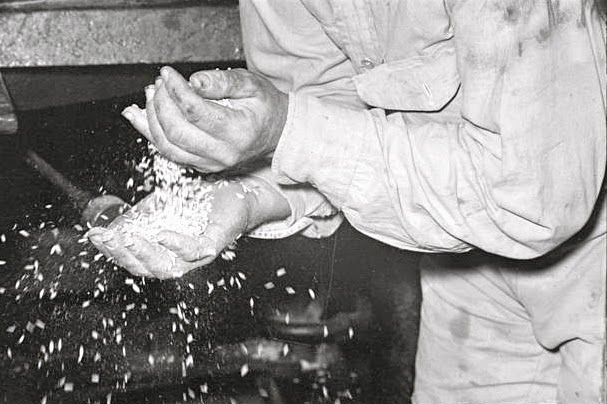 Hands down my favorite recipe from Louisa Shafia's New Persian Kitchen is the rice with yogurt tahdig, which I made last night. This is called "stuck-pot rice" in some quarters because you cook your rice in such a way that it forms a hard crust (tahdig) caked to the bottom of the pot. I'd heard of it before, but, to quote Deb Perelman, "I guffawed a bit, because who needs a recipe for that?" I used to have this great picture of my mother lounging with a glass of wine on the living room floor in her pottery clothes. It was tacked to my wall for years and my private caption for it was: “Mom, letting the brown rice burn.”

There’s a recipe for curry-spiked stuck-pot rice in The Essential New York Times Cookbook (this is it) and here's Smitten Kitchen’s lentil-fortified take on the dish. I want to try them both, but at this point can only vouch for Shafia’s unspiced yogurt version. It is fabulous and easy and you need to try it.

Here’s how it works: Cook basmati rice in rapidly boiling salted water for 5 minutes then drain. Mix some of the rice with yogurt to form a paste. Heat oil or butter a wide skillet until sizzling hot and spread the paste across the the bottom of the pan. Sprinkle with salt and flatten with a spatula. Now mound the rest of the rice on top in a soft pyramid shape. Cover and cook for 10 minutes at medium-high heat. Put a clean towel under the lid, reduce heat to low, and cook for 50 minutes more.

The rice on the bottom formed a crispy, salty, delectably oily brown crust and directly above the crust was a softer, tangier layer. Above that, was a mass of fluffy white rice. Shafia: "When made well, tahdig looks like a perfectly caramelized disk, and it can be detached from the pot and served whole, or broken into jagged, golden shards." I think it must look like this.

I didn’t even try to unmold the rice and keep the crust intact, just scooped out individual portions. Shafia describes the crust's flavor as "somewhere between fried chicken and popcorn," which captures it perfectly. Her full recipe is here. For her yogurt version, just add 3 tablespoons of Greek yogurt to the 2 cups rice and mix to form a paste.

When I handed him his plate, I explained to Owen that the brown crusty pieces were a feature not a bug. This made him suspicious/rebellious so he ate everything but the crust. Irritating! But also cool because it meant more of the good stuff for Mom. Reverse psychology is always the way to go these days.