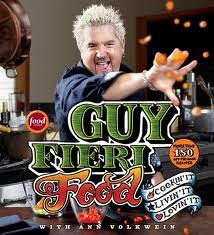 I haven't updated the cookbook reviews in months and it's been bugging me, so here comes some catch-up.

First in line: Guy Fieri Food, which Owen chose for me to cook from last summer. The cover should explain why a 10-year-old boy would gravitate toward this book and a 45-year-old woman would not.

I like Guy Fieri as a personality. I've watched his television show and he's cheerful and generous and seems like a nice man. But his recipes? Not for me. There was no way I was ever going to make his cocktail of vodka, frozen orange juice concentrate, sparkling wine and vanilla ice cream. I was never going to make his firecracker chicken wings  or Irish nachos (tortilla chips, frozen french fries, corned beef) or deep-fried string cheese sticks (wrapped in salami and egg roll skins.)

I cooked 13 of the recipes in the book, roughly 8 percent. Not enough! I should have done a few more. But I'm not going back in. For the record, we thought his gaucho steak with four herb chimichurri was fantastic. His beer can chicken was solid. His Irish Dream cheesecake (Bailey's, choclate, cream cheese) was absurd. His carrot-ginger soup was foul.

It's not a bad book. We were just ill-suited, Guy Fieri Food and me. If you want to meet cooks who  feel very differently, check out the amazon.com reviews.