Not for everyone, but definitely for me 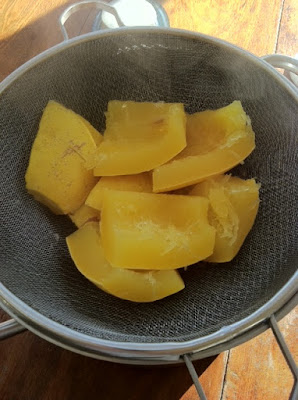 There's a delicious but strange Latin American candy that resembles a chunk of sugared spaghetti squash and is, I believe, called chilacayote, although I'm not 100% sure. I've only ever eaten it in Guatemala and by googling various clues, this is what I came up with. It is brown and hard and flat on the outside, but when you bite through the crust, the interior is supersweet and almost juicy, packed with crunchy, syrupy squash strands. It's weird. I love it.


Because of my affection for this candy, the recipe for spaghetti squash turnovers -- fariñosos -- in Delicioso immediately caught my eye. I wish I could beam one of these pastries out to everyone reading this post so you could taste how unusual and mysterious and delicious these Spanish turnovers are. How different in every way -- how subtle and delicate and complex -- from the noisy, gooey desserts we favor in the United States in 2012.

You start with a spaghetti squash. (It's not really the season, but a CSA spaghetti squash had been sitting on my counter since November.) You boil the squash, then scrape the stringy shreds from the rind and cook them down with honey, lemon, and a cinnamon stick until you have a thick, tawny jam. 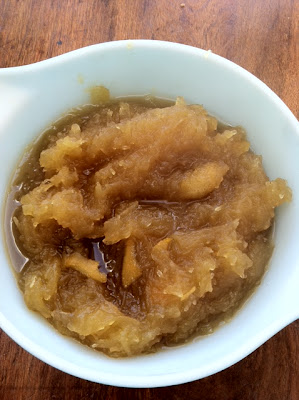 Chill the jam. Meanwhile, make a sweet lard dough which (in theory) you will roll out and cut into 12 circles that you will fill with squash jam and fold into turnovers. Brush these with olive oil, sprinkle with sugar, and bake.
Well, it didn't turn out quite like that. The uncooked dough was crumbly, and greasy and there wasn't enough of it. I ended up with four turnovers -- and these were fragile and patched together. I was very angry at this recipe.

Until I ate one of those turnovers. Now I just want to adjust the dough recipe so it works better and I can share it. What there was of the pastry bakes up tender and faintly sweet with that almost smoky depth of flavor that you get with home-rendered lard. (Casas says you can use shortening, though the pastry will taste different, probably less.) The squash filling is light and floral with just enough lemon and cinnamon to give it bite and spice, but not so much that you would ever call it a citrus dessert, or a cinnamon dessert. It's definitely . . . something else. You'd recognize it as squash if you did the baking, but you'd spend some time wondering if you didn't.

I ate all four of these turnovers because no one in my family showed any interest. I'm torn between making another batch right now and fixing the recipe so I can post it. This might be as easy as doubling the quantities and very slightly tinkering with proportions. Alternatively, I can pursue my original plan for the afternoon, which was to go to the DMV and take the steps necessary to sell my mother's Toyota.  I mean, the car has only been sitting in the driveway for 25 months.
Posted by tipsybaker at 4/23/2012 01:35:00 PM