We kilt those green bell peppers

Blogger erased my last post, which is not a huge loss except that I wanted someone to make Heidi Swanson's white beans and cabbage from Super Natural Every Day and then to reassure me that it is as incredible as I thought it was. I've reattached the recipe to the end of this post. I worry that I'm losing my critical faculties, as being on a diet has made everything taste wonderful to me.

Almost everything. I still don't like green bell peppers. Although this is the season of asparagus and cherries, in our CSA box last week they gave us cold storage apples, zucchini(?!) and three green bell peppers. I really hope they don't keep this up or I might have to shop around for new A to CS.

I've only ever made one recipe in my life that highlighted green bell peppers to good (or any) effect. I  remember it like it was yesterday. To my shock, when I looked up this recipe, I saw that I made it in September 1998. Owen was -2. That's a long time to remember a recipe.

Was it really that good? 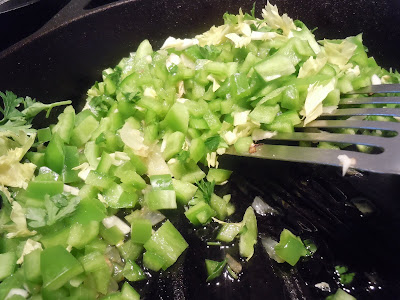 I made it again on Friday night and, yes, it is as improbably delicious as I remembered. You cook small pieces of green bell pepper in olive oil with onion and parsley until they combine to form a soft, sweet melange, then you toss this lovely green sauce with pasta shells and some Parmesan. I probably wouldn't go out and buy green peppers just to make this -- it only encourages the farmers -- but if you need to use some up, this is the recipe you want. It comes from Verdura by Viana La Place, one of my favorite cookbooks. I've made a few very slight changes.

1. Heat the olive oil and onion in a wide skillet and cook until the onion is translucent. Add the garlic, parsley, green peppers and some salt and pepper. Cook until the peppers are tender.

2. Meanwhile, cook the pasta in a big pot of boiling, salted water. When the pasta is almost done, scoop out about 1/3 cup of the water and add to the skillet of warm peppers. Drain the pasta. Add it to the skillet, toss in the butter, and stir until everything comes together. Serve with Parmesan. Serves 6.


And here is the recipe for Heidi Swanson's white beans and cabbage. If you make it, let me know what you think.


2 tablespoons unsalted butter or olive oil
4 ounces thin-skinned potatoes, unpeeled, scrubbed, and finely diced
kosher salt
1 large shallot, thinly sliced
2 cups cooked and cooled white beans (I used navy beans)
3 cups very finely shredded green cabbage (about half a head -- though I would use more next time)
pinch of red pepper flakes (optional)
Parmesan
1. Warm the butter or olive oil in a large skillet over medium high heat. Add the potatoes and cook until they are cooked through, 5 to 8 minutes. Be sure to scrape the pan and toss the potatoes once or twice along the way so all sides are browned
2. Stir in the shallot and the beans. Let the beans cook in a single layer for a couple miutes until they brown a bit, then scrape and toss again. Cook until the beans are crusty on all sides
3. Stir in the cabbage and cook for a few minutes until it "loses a bit of its structure." Serve with Parmesan.