My yard is a petting zoo

We babysat our niece and nephew last weekend so that Justine and Michael could go away for their anniversary. Ben sat on the deck and sprayed himself with the hose just about the entire time.  I tried to remember what my own children were like at 18 months. I tried to remember what they ate, how I got them to sleep, when they woke up, how they liked to play. Couldn't. None of it.

For dinner, I served the children Heidi Swanson's mostly-not-potato salad out of Super Natural Every Day.
It's in the big bowl, but the humans were cuter than the salad. I was very drawn to this recipe -- a melange of chopped celery, green beans, tofu, and a very few potatoes -- because it seemed like a good diet dish, which it was. But it was not so much fun to eat, at least not when your mind is on potato salad. Conceptually, it's on a par with mostly-not-avocado guacamole or mostly-not-chocolate brownies. I mean, it tasted nice, but maybe it needs a new name. Like, chopped celery salad with potatoes?

On Sunday morning, I got up early and made Swanson's baked oatmeal. I had one of those dangerous self-congratulatory thoughts as I prepared this pretty, pretty dish. I thought, "Stella is going to love this and remember forever the baked oatmeal she had at Aunt Jenny's." Having deceived myself in this manner repeatedly over the last 14 years, I immediately I self-corrected: "This is not going to happen. Just thinking it actually ensures it's not going to happen." 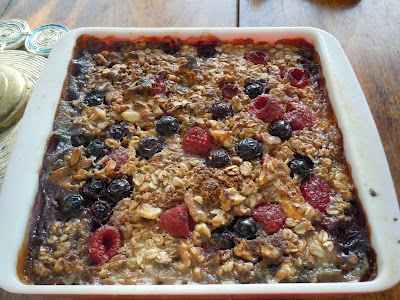 I am a sage! It did not happen. I served the oatmeal to Stella who wrinkled up her nose and said, "I don't like it. I don't like nuts."

Owen said, "I don't like oatmeal that is baked."

Isabel looked at it and said, "Oh, it has fruit in it. No thanks."

My husband thought it was tremendous and ate heartily, and I agreed: tremendous. The recipe is here. If I were to make it again, I might increase the sweetener just a bit.

Apart from complaining about the baked oatmeal and spraying themselves with the hose, the children spent a lot of time with the goats and chickens.

I have turned into the eccentric woman with the crappy (all senses) back yard and too many animals. I did not see this coming.

On Monday, I made Swanson's dilled green beans and seitan. The little kids were gone by then -- I would not have imposed this on them. While I loved the chewy, spongy seitan, no one else ate it. No complaints, no fights, just no one ate it. My husband pushed the seitan to the side of the plate.

And with that I was done with Super Natural Every Day.  I still want to make Swanson's bran muffins, tutti frutti crisp, and carnival cookies, but I decided not to force myself. They are fattening treats and this isn't the spring for fattening treats.

Anyway, there's a sweet coda to my short expedition through this lovely book. On Tuesday, I found myself with aging CSA corn, aging CSA fava beans, aging CSA green peppers, and brand new CSA cilantro. I concocted a dish that was entirely inspired by Heidi Swanson, using up ingredients I bought to cook from her book. It was fabulous. So fabulous, in fact, that I wrote the recipe down. 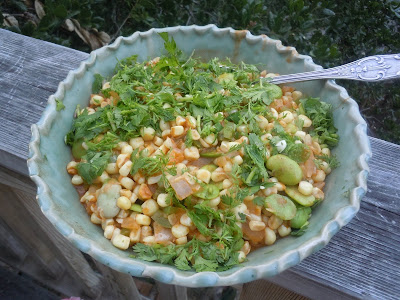 Super Natural Homage Succotash
1 pound fava beans (week old is okay)
4 ears corn (they don't have to be just picked -- week old is okay)
2 tablespoons coconut oil (or vegetable oil)
1 small onion, finely chopped
1 small green bell pepper, finely chopped
1/2 cup canned coconut milk
2 tablespoons Thai red curry paste
kosher salt to taste
handful of fresh cilantro, finely chopped
1. Shell the fava beans, peel off the skins, and blanch for one minute in a pot of boiling water. Drain.
2. With a sharp knife, scrape the kernels off the corn.
3. In a large skillet, heat the coconut oil with the onion and green bell pepper. Cook for about 5 minutes until soft. Add the corn. Cook, stirring, for 3 minutes.
4. Add the coconut milk, curry paste, and fava beans and a splash of water. Stir and cook for a few more minutes. Taste for salt. Scrape into a bowl and top with cilantro. Serves 4.
I served the succotash with steak, which was not very Heidi Swanson, but is very Guy Fieri, whose book I start tomorrow night.
Posted by tipsybaker at 5/27/2011 09:08:00 AM

Labels: Super Natural Every Day
Email ThisBlogThis!Share to TwitterShare to FacebookShare to Pinterest