Me and The Egg and I 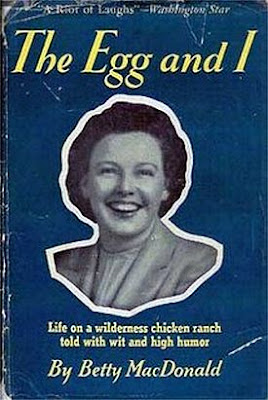 It would be impossible for me to exaggerate how much I love this book. My 1946 library copy had to be retrieved from "in storage" by the librarian, which is a shame. How does anyone ever find a book that's "in storage" if they're not actively looking? This book is worth actively looking for. Don't be deceived by the dated and saccharine jacket photo: Betty MacDonald's autobiography is as vivid and tart and edgy as anything I've ever read.

MacDonald is probably best known today as the author of the Mrs. Piggle Wiggle series for children. But she was more famous once upon a time for this best-selling memoir about the early years of her first marriage, when she and her husband Bob moved to a chicken ranch in the mountains of rural coastal Washington, miles from their nearest neighbors -- who happened to be Ma and Pa Kettle. Yes, that Ma and Pa Kettle. Here's MacDonald's description of her initial visit to the Kettle home:

"Mrs. Kettle, a mountainously fat woman in a very dirty housedress, waddled to the corner of the porch and called cordially 'Come in, come in, glad to see you!' but as I drew timidly abreast of the porch my nostrils were dealt such a stinging blow by the outhouse lurking doorless and unlovely directly across from it that I almost staggered. Apparently used to the outhouse, Mrs. Kettle kicked me a little path through the dog bones and chicken manure on the back porch and said, "We was wonderin' how long afore you'd git lonesome and com down to see us," then ushered me into the kitchen, which was enormous, cluttered and smelled deliciously of fresh bread and hot coffee."

While that's not the most generous or flattering description (see criticisms of MacDonald below), she develops genuine affection for the Kettles and her portrait of the couple is, I thought, curiously sweet. She has little use for her other neighbors, however, even less use for the chickens, and, one begins to suspect, no use at all for Bob. I make her sound sour and negative, which she isn't. She's smart and funny and outward-looking and has such a genius for describing scenery and people that it came as a surprise when I realized she is also writing about loneliness and a deeply unhappy marriage. The book is breezy and full of "high humor," but it is also quietly sad.

I was so taken with The Egg and I that I went and read all sorts of background material. It turns out that not everyone loves The Egg and I.

1. Some readers think MacDonald is a snob. They are absolutely correct. She thinks she's smarter than the Kettles and every other bumpkin she meets, and you know what? I'm pretty sure she was. I can see why some readers are annoyed, but her attitude did not bother me. I give her a pass on this one.
2. Some readers think MacDonald is a racist. Sadly, her depictions of Indians are indeed hideous and boil down to: dirty, drunk, shiftless. She was narrow and unsympathetic and stubborn in her prejudices and though she doesn't write much about Native Americans, when she does it will make you flinch. There was one passage that almost made me put down the book.

That said, it's not fair to judge her by contemporary standards. People of her generation did not reflexively try to understand the social and historical factors that might lead to, say, an epidemic of alcoholism among Native Americans. They did not refrain from making racial generalizations. If MacDonald's ethnic biases are going to drive you crazy, which they might, you should definitely skip chapter 16.

Thanks to the two people who missed me enough to write comments. I am touched. My children have been in New England forever and they will be in New England for weeks yet to come. While at first it was restful, I am now bereft. I will try to dredge up material to write about because losing my children AND my blogging rhythm is just too much to bear.
Posted by tipsybaker at 7/19/2010 08:57:00 PM