Do you think I could stretch it into a novel? 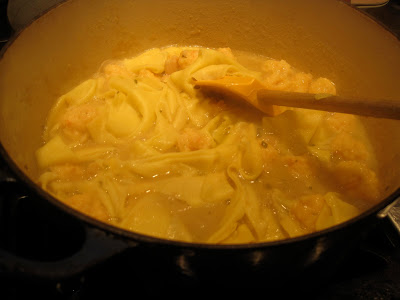 I like to manage expectations. Below you will find an uneventful First World slice-of-life story with no sex, no violence, no dialogue, and one character.
Once upon a time, there was a woman who had been cooking a lot of fantastic stuff out of Barbara Lynch's superb book Stir for her family. Specifically:
-torn pasta with shrimp polpettini. (See above.) This involved cutting homemade pasta into odd, raggedy shapes, cooking them, then combining with a sumptuous sauce of white beans and poached shrimp dumplings. You can not imagine a more breathtaking pasta -- and it would work almost as well without the shrimp.
-fresh pasta with green beans and potatoes. Exactly what it sounds like and quite tasty. However, the woman and her daughter agreed that pesto made with Lynch's formula had too much bite.
-pasta envelopes stuffed with Epoisses cheese and tossed with a sauce of celery and apple. This dish was both labor-intensive and expensive, as Epoisses cheese, rich and stinky, costs $26 for a 9-ounce round. The woman's daughter and husband thought the cheese was too stinky. The woman thought the cheese was delicious, but that her unsightly homemade Taleggio was just as rich and stinky and delicious, and cost a lot less. How much less, she did not compute.
-risotto with aged gouda. A porridgy crowd pleaser.
-yogurt panna cotta. A puddingy crowd pleaser.
The woman wrote a cookbook review blog and she took her unpaid work seriously. She kept meaning to post about each dish as she cooked it, but this was an altogether frantic, anxious time. She had some intense paid work projects to complete, was worrying about settling her recently deceased mother's estate, and got up very day at 5 a.m. to bottle feed warm milk to baby goats. The goats had never once said thank-you. She was also driving children to and from various camps and lessons almost hourly, which made her a 21st century parenting clichee. Sometimes her daughter said thank-you.
Whatever. Boring. Everyone was busy. It was the fashion.
One day, in between chauffeuring her children to enriching activities, the woman ran a tedious errand in San Rafael and spotted a cafe she'd heard about called Brazil Marin. In this small ethnic supermarket/diner, a couple of slouchy men were watching the Brazil-Chile game on TV. The woman decided to stop; she never stopped. At the counter, she ordered a "cheese bread" and served herself some stew, rice, and beans from the steam table buffet. On top of it all she sprinkled manioc and vinegary salsa. Then she took the plate outside to eat in the sun and read her novel.*
The cheese bread was so delicious it almost made her faint: pale and crusty on the outside, borderline glutinous on the inside, chewy, super-cheesy. She started trying to figure out how to make it at home and then thought: Why? Like she needed more chores? She stopped trying to figure out how to make Brazilian cheese bread at home.
Then she began eating the beans and rice and stew. Objectively speaking, none of it was as "good" as the pastas she'd recently made from Barbara Lynch. Still. It was so overwhelmingly pleasant to be sitting in the sun, eating homey food that someone else had cooked, that, to her complete surprise and bemusement, the woman burst into tears. She cried off and on for the rest of the day. Then she was okay.
The End.
Questions for discussion: What did eating rice, beans, and stew mean for this character? Was it about missing her "recently deceased" mother? Or was she simply feeding too much without getting fed? Is that a problem for women in our culture? Would the story have been more exciting if the woman had flirted with one of the Brazilian men watching soccer instead of buying lunch? Do we really believe the cheese bread "almost made her faint?" Discuss.
In other news, Isabel and I made a light, nearly perfect cupcake, using many of your suggestions: oil, cake flour, yogurt. 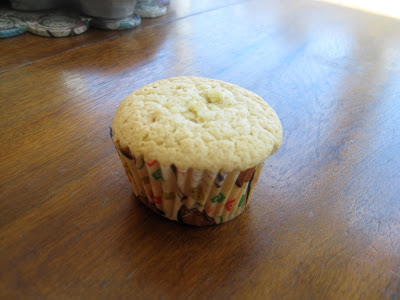 The cupcake has a macaroon-like top crust that is actually very tasty, but not technically ideal. Still, this is close! Research continues. Thank-you.
*Amy & Isabelle by Elizabeth Strout. Whew. Strong stuff. The Epoisses cheese of Elizabeth Strout novels. Recommend!
Posted by tipsybaker at 7/01/2010 05:15:00 AM