A couple that rarely dines out dines out 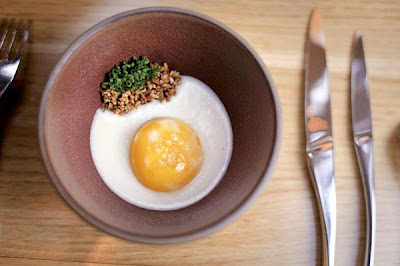 The other night we went to Commis, a popular restaurant that San Francisco Chronicle critic Michael Bauer called "a slick, minimalist stage for rising star chef James Syhabout." There was no sign on the restaurant and only when you looked closely at the storefront could you see people moving around inside the small, stark room.

Husband: "I file that under 'precious.'"

The deal was: $59 for three courses, with three selections for each course.

(There was more detail about each dish, but I didn't memorize the menu.)

Husband: "For $59 I think they should give you more options."

Tipsy: "I'm getting the alliums."

Husband: "Which do I hate less, eggplant or zucchini?"

Tipsy: "Get the alliums!"

Husband: "You're getting the alliums."

Tipsy: "We can both get alliums."

Husband: "I don't even know what alliums are."

Husband: "So pompous. They have to make up new names for everything."

Tipsy: "You know what? I'll get the zucchini."

Husband: "But you said you weren't going to get the zucchini."

Tipsy: "But you're right, we should get different things. I want the zucchini."

"Here's an amuse bouche for you tonight," said the waiter, and set some bowls on the table. Husband gave me a look. I looked back. Yes, it's a twitty term, but what else are you supposed to call it? In any case, it was dazzling: a soft-boiled egg yolk swathed in an opulent, lukewarm onion puree, the whole thing designed to look like a perfect fried egg. It was even more delicious than it was beautiful and it was exceedingly beautiful.

Husband: "I think that dish would be better without the egg yolk which obscures the good tasting stuff underneath."

Tipsy: "You are entitled to your wrong opinion."

Then the alliums came, accompanied by multiple garnishes including some raw tuna that was more luscious and fantastically delicious than any sashimi we'd ever tasted. Bauer describes a similar tuna he sampled at Commis as "so finely chopped it practically melted like snow."

The zucchini had been thinly shaved into ribbons, rolled into coils and plated with chunky porcini mushrooms and assorted vegetables. I gave it 2 Weight Watchers points, which, aside from the mushrooms, was the only great thing about the dish.

My entree: "slow-cooked" Duroc pork, both loin and belly, which arrived in a painterly ensemble with cauliflower foam, new potatoes, and tiny halved turnips. The pork may have been cooked sous vide, as it was suspiciously tidy, tender, and intensely flavored. I have never made pork that delicious. Husband ordered quail, which was tasty, but scant, and came with beets.

Husband: "What I don't understand is why they whipped up your cauliflower but they had to give me plain beets. You're not supposed to eat these things plain unless you're some kind of a farm animal."

Before dessert the waiter brought shot glasses containing rose geranium-blueberry soda and even my husband couldn't think of anything withering to say about the lovely drink.

For dessert, he ordered chocolate brioche and I ordered peach cream. Again, lots of stuff happening on the plates: purees, ovals of sorbet, chunks of fruit, cake, foam. The best garnish of all were some roasted strawberries, which were meaty and fragrant. Roasted strawberries have so much more character than virginal uncooked strawberries and would make an amazing ice cream. Maybe I'll try making it one day.

The dinner was expensive and we probably won't go back, but I felt we got our money's worth.I can cook Chez Panisse food. I can cook Big Sur Bakery food. I can braise short ribs, mash potatoes, make a goat cheese salad and bake a rustic peach crisp. But I can't make foam or nest coddled egg yolks in bowls of puree or assemble multi-part desserts and follow up with absinthe gelees. I enjoyed the kitchen wizardry and my husband got to exercise his caustic man-of-the-people schtick.

We ambled into the night.

Husband: "That was fun."