Try this, won't you? 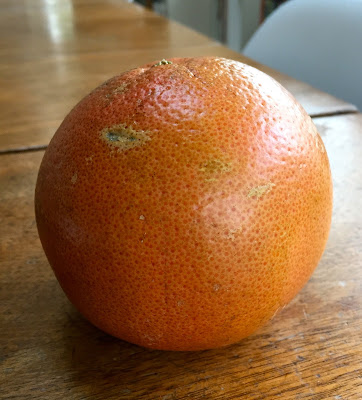 January is a grim month. I have some good news, and some bad.

We’ll start with the good. Grapefruit. It’s in season and it’s delicious, especially the pink kind. Not as delicious as a peach, but, hey, it’s January. So go buy some pink grapefruits. Come home and cut one in half. Preheat the broiler. Use a grapefruit spoon or a little knife to loosen all the sections, but leave them inside the grapefruit. This should take about 25 seconds.
Mix 2 tablespoons salted butter (or unsalted plus a pinch of salt) with 1/4 cup brown sugar until clumpy, like streusel. Add 1 cup Wheat Chex, crushing just a little bit so you have some small bits but also a lot of whole Chex. Mix briefly and gently. Pack about a third of this irresistible stuff on half the grapefruit. Put the rest of the streusel and the other half of the grapefruit in the refrigerator for subsequent meals. Broil the grapefruit until warm and slightly bubbly. Enjoy.

If you're like me, you have doubts about the idea of streusel-topped, broiled grapefruit. How does sour, sharp, cold, and juicy possibly meld with sweet, buttery, warm and crunchy?

No idea. It just does. Miracle. Try it.

Now for the bad news: You won’t want to eat a grapefruit any other way after you've tasted it broiled and topped with streusel. The pleasure of unfattening plain grapefruit has been lost to you.

Some other recommendations to brighten your January:

*The kale-apple-walnut salad from Zahav is tart, crunchy, and terrific. Recipe here.

*The sliced fresh oranges with honey from Zuni Cafe make a refreshing dessert after something rich like lamb shoulder. (Not that fresh fruit is ever a proper dessert.) 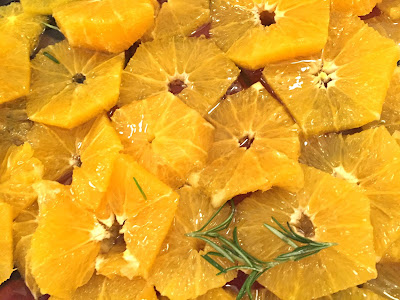 *The Zahav tahini cookies are a cross between shortbread and halvah. Couldn't be tastier. Couldn't be easier.

*This is a stunning piece of writing.

*Karina Longworth’s fascinating history of Charles Manson's Hollywood on the podcast You Must Remember This enlivened many hours of tahini shortbread-baking, dishwashing, driving, folding, and sweeping last week.

*I saw the movie Brooklyn twice, most recently with a 10-year-old girl and 15-year-old boy, both of whom were enthralled. As was I.  It's a wondrous film, romantic and funny, but also thoughtful, compassionate, and poignant. I've seen all the Oscar best picture nominees. This is my favorite by far.
Posted by tipsybaker at 1/26/2016 12:03:00 PM