I may never taste a white negroni, now

This requires a brief explanation, I feel, given the name of this blog and its purpose, which is to chronicle as honestly as I can everyday life in and around a kitchen. Mostly around a kitchen. I've strayed a bit.

For most of my adult life I drank moderately. Then, around the time my mother got sick when I was in my early forties, I began drinking immoderately. A problem. I made resolutions to quit drinking, broke them, set limits, kept charts, gave up on charts, would stop for a month, would stop for a few days, et cetera, et cetera, et cetera, and it didn’t work and it didn’t work and this went on for a few years and then one day it all worked. I woke up and I was a moderate drinker again. In fact, I was more moderate than I’d ever been before. I gradually became almost (almost!) indifferent to alcohol. This period of moderation lasted for about three peaceful years and brings us to October 2015.

As you may recall, this past fall I read a nerdy self-help book for managers called Getting Things Done that I raved about maniacally in a post a while back. The author of GTD talks a lot about the “open loops” in your life, those uncompleted tasks/unresolved problems that weigh on your mind. I thought, hmmm, drinking. It wasn’t a problem anymore, but didn’t it always sort of weigh on my mind anyway? Would I be more tranquil if I just gave it up altogether and became a nondrinker? Could I actually do it?

The answers: yes, yes, and yes. I started off intending to quit for one month and it was so easy and pleasant I just kept going. Everything improved with booze off the table -- sleep, health anxieties, weight, self esteem, restaurant tabs, parties, mood. It was incredibly restful not to have to decide whether to have a glass of wine. I’d had no idea such decisions were still so loaded for me, but even just having to entertain the question for a few seconds had been stressing me out a little.

After two and a half months of abstinence, I decided on New Year’s Eve (a.k.a. day-before-yesterday) that I would have a manhattan, once my favorite cocktail, to see if I wanted to resume moderate drinking. Mark encouraged this. He didn’t see why I had to be rigidly abstinent. Neither did I.

Ay, caramba. Take some time away from manhattans and ... ugh. The ensuing buzz from that one manhattan was claustrophobic and unpleasant and I bitched the whole time about how “not fun” it was and by the time the glass was empty I had a headache. I bitched about that as well. A swell New Year’s date I was. When I went to bed I was queasy. I slept terribly. I woke up grimly triumphant, knowing that I was done with drinking, at least for the foreseeable future.

In hindsight, it's clear that I was never going to give that manhattan a chance. I'd hardened my heart against the drink long before I took my first sip and approached it -- or should I say him? -- with a spirit of vengefulness. For a few grim years alcohol had been like a charming, sociopathic boyfriend who kept doing me wrong, but whom I couldn't seem to get over. Now that I was really and truly over him was I really going to let him come to me with flowers and bonbons and tell me how much he missed me? Well, yes, I was. But I certainly wasn't about to succumb. I just wanted to see him on his knees.

Anyway, that's it. That's my story for today. To be honest, it has felt like a huge life accomplishment.

Mark, on the other hand, thinks this is all very sad.

Yesterday, I made the hoppin’ john from Sean Brock’s Heritage, such a lovely dish, reliant though it is on mail-ordered red peas and Carolina gold rice. One of the many fine dishes I made in 2015 and if I kept a nice, orderly list I would be able to give you some kind of top ten. One of my resolutions for 2016: keep a list of dishes I cook.

I also plan to keep a better list of the books I read so I can compile a top ten books list. Also: movies. In any case, this is the best book I read during the doldrums between Christmas and New Year’s and one of many fine books I read in 2015.
These were the cookbooks my father, sister, daughter, and cousin gave me for Christmas: 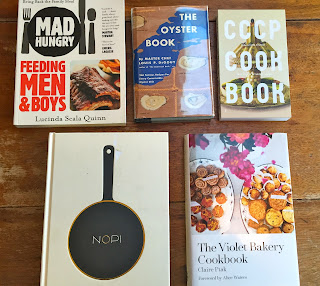 This is the absolutely thrilling cookbook the library brought me last week: 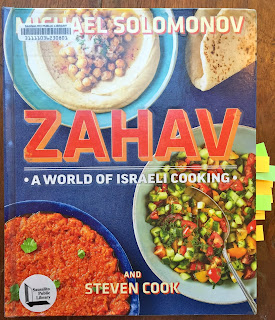 I'm not sure how deep I can dig into it before the due date, but I'm going to give it my all.

Labels: zahav
Email ThisBlogThis!Share to TwitterShare to FacebookShare to Pinterest