Five hours until Mark comes home and we can continue watching Making a Murderer. I am in agony. Are you watching this incredible show? It’s a 10-part Netflix documentary about an uncanny crime saga in Manitowoc County, Wisconsin involving a wild, enraging, heartbreaking cast of characters and I would have stayed up all night to see the end if my companions had been willing. I can't recommend it more highly.

A couple of stellar dishes from Michael Solomonov’s Zahav yesterday, although I was the only one who thought so. I'm 100% right, of course. These two dishes aren't even on the borderline. Total winners.

Michael Solomonov: "Mina is the Ladino word for pie. This Passover dish, common throughout the Sephardic world, is almost good to be true.”

I have a serious question: Is it sacrilegious to make a Passover dish when it's not Passover and you're not Jewish? Is it cultural appropriation? Or is just eccentric, like a Jew or Muslim making buche de noel in July? Or is it none of the above?

I did some internet research and found this in an Atlantic story about the recent cafeteria crisis at Oberlin:

“People don’t usually think about food as something that deserves respect, but food is reflective of the heart of different cultures. I identify as religiously and culturally Jewish and I would be offended if someone prepared a traditional Seder plate incorrectly at some time other than Passover. This would de-sanctify the religious meal of Passover and reduce it to just another quotidian meal."

Thoughts?
In any case, what's done, is done.

To make this Sephardic pie, you fry up a simple hamburger filling of meat, onion, garlic, a tiny bit of coffee and cardamom. Soak some matzoh in water until pliable and line a baking dish. Spoon the filling atop the matzoh. Top with more matzoh. Bake. Unmold. Serve this lovely, spicy, satisfying pie with a charoset of carrot, apple, raisin, and walnut. It's more like a salad than the charoset I've had at seders. (I think I'm more comfortable calling it "salad.")

Owen wolfed his slab of meat pie down in under a minute. He was in a horrible mood. I said, “So you like that!”

He replied, “I’m only eating this because I’m really hungry.” Shortly thereafter, he and Mark got into a big, dumb fight and Owen stormed off. He yelled, “Now I’m making a quesadilla, Mom. That food was bad.”

Talk about de-sanctified. A minute later Owen was back, shoveling more pie onto his plate. He said, “I’m only having seconds because we don’t have any of the good kind of tortillas.” Then he stormed off once more.

Isabel did not try the mina.

Mark knows his role on this blog and plays it with verve. Of the mina he said, “It’s too weird. All the parts are good, but why not serve a nice hamburger with some bread on the side?” 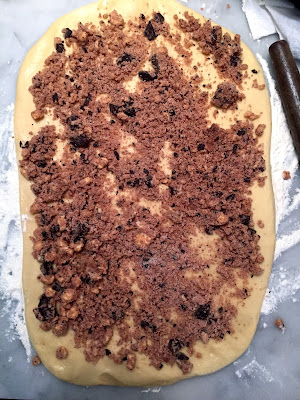 Lord, this was delicious. Make a sweet, rich yeast dough, roll it around a buttery chocolate crumble, freeze, slice, assemble the slices in a loaf pan, top with more crumble, bake. I believe the Zahav recipe can be found if you search Google Books, but the URLs are too long for me to link. If you do find and decide to make this splendid recipe, expect to add lots more flour than called for. Just keep adding flour until you have a soft dough and you’ll be fine. Better than fine.
Mark:  “It’s good, but it's not a cake and you wish it were a cake.”

Mina with ground beef, cardamom, and coffee, adapted from Zahav. I added kale to the meat filling, used more onion, doubled the raisins and apple in the salad and made a few other changes.

Preheat the oven to 400 degrees F and generously oil a medium-sized baking pan of some kind (I used a deep 9-inch pie plate). Brown 1 pound ground beef (I used chuck) in a little oil in a wide skillet. When it’s brown and crumbly, add 1 chopped onion, 5 minced garlic cloves, and a little salt. Cook for a few minutes and add a bunch of kale, stems removed and leaves shredded. Cook until all the vegetables have softened, but not browned. Add 1 teaspoon finely ground coffee and 1/2 teaspoon ground cardamom. Mix well. Taste for salt. Now, soften 5 or 6 sheets matzoh in water, just long enough that you can bend them a bit but not so long that they disintegrate. Line the oiled pan with the matzoh, overlapping slightly if necessary. (It won't be tidy looking.) Spoon the meat into the matzoh shell. Layer more damp matzoh on top, pressing the edges to seal. Brush with some beaten egg and bake until the pie is golden and crisp, about 30 minutes. Let stand for 5 minutes. Invert onto a platter and serve with the following salad. 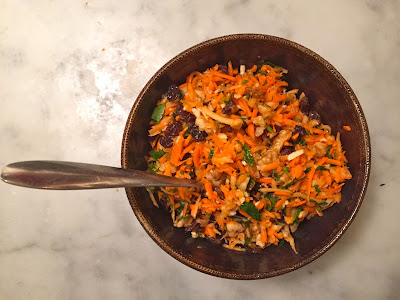 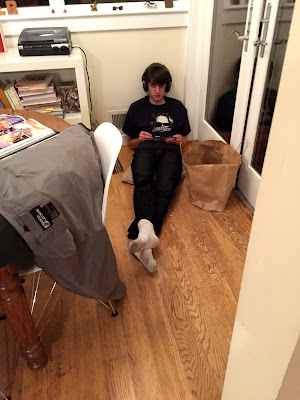