What would the world do without me?

A commenter expressed bafflement at my recent posts and I need to provide some context. For those of you who aren’t already avidly tracking the competition, every winter Food52 holds a cookbook contest called the Piglet modeled on the Morning News Tournament of Books.* The Food52 staff and community choose noteworthy cookbooks from the previous year and pit them against each other in a tournament that is judged by a writers, chefs, and sundry qualified and unqualified luminaries. Roz Chast, Alice Waters , and Stanley Tucci have all judged in the past and the quality, sensibility, and style of the reviews varies widely. That’s part of the fun of the Piglet. You see how different people use and value cookbooks -- and how some, like Roz Chast, don’t. In each round, a cookbook is advanced and one is dropped. At the end of the tournament, a single book prevails. Comments on the reviews can get extremely heated.  I love the Oscars, but I love this a little more.

The other day, writer Adam Roberts weighted the merits of Fancy Desserts by Brooks Headley against A Kitchen in France by Mimi Thorisson. I agreed with everything Roberts wrote in that charming, intelligent, and persuasive review -- except his conclusion.

I’m not at all confident that Fancy Desserts is a better cookbook than A Kitchen in France.

What follows will be interesting only to cookbook geeks and boy, do I feel like a cookbook geek even writing it. But here goes.

The first Headley recipe I tried 10 days ago was the fake healthy chocolate chip cookies with lots of salt. (He calls them “fake healthy” because they contain whole-wheat flour.) The dough was oddly crumbly and dry, but I forged ahead and baked a batch, trusting that everything would work out in the end. It didn’t. The cookies were disastrously crumbly and dry and I threw away the rest of the dough. What had gone wrong? I pulled out Kim Boyce’s Good to the Grain (Piglet winner of 2011) to see how Headley’s recipe compared to her own renowned and impeccable whole-wheat chocolate chip cookie recipe. His recipe is identical except that he calls for an additional 3/4 teaspoon of salt and an additional 1 1/4 cups flour.

No one adds 1 1/4 cups flour to a functional cookie recipe. This was clearly a mistake. Mistakes happen. But it wasn’t an auspicious start to my experience with Fancy Desserts. And what to make of the fact that, aside from a little salt, Headley’s recipe was identical to one already published and much adored?

A few days later I made his fregolotta -- giant almond cookies you’re supposed to be able to smash at the table. They needed to bake twice as long as indicated and were bendable, not smashable. Delicious. But not as advertised. 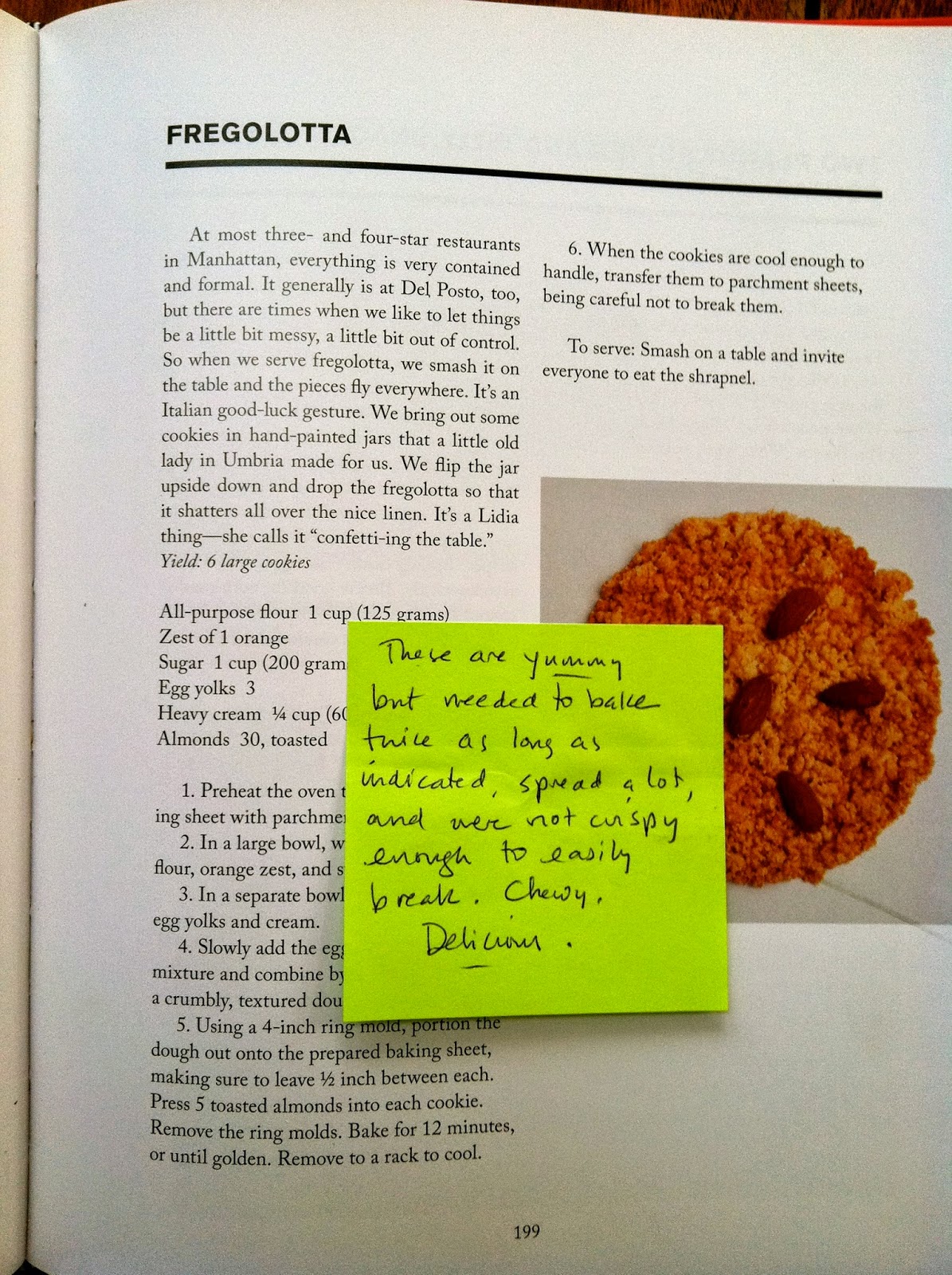 Random frustration: I’d been hoping to try some of Headley’s gelato recipes, particularly the cashew gelato and maybe the yeast gelato as well, if I started feeling hostile towards my family. But his recipes call for dextrose to keep the gelato soft and that stopped me in my tracks. Is he talking about dextrose powder? Liquid dextrose? This? Where can I buy dextrose? Unless I missed something, there is no such information in the book and after 10 minutes of googling, I couldn’t figure out what kind of dextrose you’d use in gelato or where to buy it. I gave up. Do you know the answer?

None of this criticism of Fancy Desserts is a knock on the Roberts review. The opposite. Roberts made a strong case for the book and provided solid evidence. I had decided firmly against Fancy Desserts before I read his review and he convinced me to reconsider. So that’s what I’m doing.

*The Tournament of Books is great. When people start discussing Gone Girl, I always want to tell them to go read this.
Posted by tipsybaker at 2/21/2015 10:54:00 AM

Labels: a kitchen in france, fancy desserts, good to the grain
Email ThisBlogThis!Share to TwitterShare to FacebookShare to Pinterest