The particular sadness of apple cake 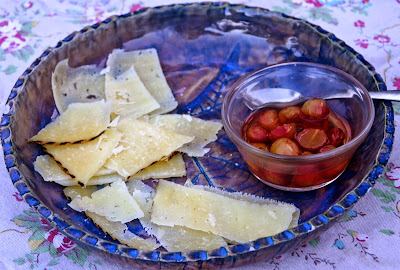 R.I.P. Marcella Hazan. If you don’t own any of her books, you should change that. They’re all excellent except Amarcord, her memoir, which made me dislike her a little bit. But you don’t have to be a warm, big-hearted person to write excellent cookbooks. If you only buy one of her books, I'd buy Essentials of Italian Cooking and make the pasta with tomato and butter sauce. Perfection.

I apologize for the long absence. I’ll explain. But first, some recipes, most of which I served at a family party:

-chai pickled grapes from Ed Lee’s Smoke and Pickles. Wonderful. Easy. You should buy some crispy red grapes and pickle them today. I served these with manchego cheese (Lee’s suggestion) and this might be the most memorable dish I’ve prepared from his book. The recipe for the grapes is here. I cut it by two thirds because I don’t own a restaurant; as I've mentioned before, Lee doesn’t always scale for the home cook.

-Lee's oysters on the half shell with rhubarb mignonette were nothing special. Raw oysters, thin vinegary sauce. I could not taste the rhubarb. Almost stabbed myself while shucking oysters.

-Lee’s pulled lamb barbecue was expensive and a fair amount of work and had the gamy, funky lamb flavor that I enjoy only in very small portions. I worry I'm on the brink of not liking lamb. An interesting experiment, but I prefer pulled pork. Also, the recipe calls for boneless lamb shoulder and then instructs you to cook it until the meat “falls off the bone.” That’s a challenge. It leaves you unsure what meat you're supposed to buy. I went with boneless and it worked fine. The recipe is here and if you love lamb and have a day to devote to cooking it, give this a shot.

-Cheesy broccoli casserole came from a book called Real Cajun by Donald Link and it’s a hearty, rich casserole in the hallowed American tradition that relies on Campbell's cream of mushroom soup. But instead of opening a can, this recipe has you make your own. Your kitchen will look like it was hit by a tsunami and you’ll be scrubbing pots for an hour, but the casserole is worth it. The perfect dish to bring to a potluck or someone else’s Thanksgiving dinner when you don’t have to cook anything else.

-For a weeknight dinner I made Lee’s habanero-lemongrass marinated steaks. Confusing because on the plate was something that looked like an expensive T-bone steak but tasted like stir fry. I’m conditioned to want expensive steak to taste like steak. You might feel differently. If so, give these a try.

So that’s the cheerful cooking wrap-up. Now I'll tell you why I had to take a break from cooking and blogging.

About 10 days ago I baked Smitten Kitchen’s mother’s apple cake. Believe it or not, this cake was even prettier than it appears in Deb Perelman's photo. It was really delicious. It wasn't weird or healthy or gluten-free. Just a beautiful, fattening, old-fashioned cake full of sugar, cinnamon, and apples.

No one except me ate it. My children did not even taste it.

A day or so after baking this cake, I flew to Las Vegas for a magazine story I’m writing about thrill seekers. For research, I rode the XScream, an instrument of torture atop the Stratosphere. Have you ever ridden the XScream? My hatred of the XScream is boundless. I would like to say you couldn’t pay me to ride the XScream, but apparently you can. The next day I did a zip line and after the XScream I could have napped on that zip line.

During the 30 hours that I was gone, Mark decided to bake a tube of Pillsbury cinnamon rolls that he’d been keeping in the refrigerator. He and the kids gobbled them all up. When I came home from Las Vegas, exhausted and maybe the tiniest bit strung out, I found an untouched apple cake and an empty cardboard tube that had recently held Pillsbury cinnamon rolls.

Oh boy. Bring on the crazy.

Tearfully I told Mark that Pillsbury cinnamon rolls were redundant when there was a homemade apple cinnamon cake on the counter, that he and the kids didn't appreciate me, that I'd wasted years cooking for this family because all anyone ever did was make fun of me or complain, that he’d turned the children against my cooking with his jokes and Pillsbury cinnamon rolls. That our children don't eat vegetables because he made hating vegetables seem cool and funny. Because he is cooler and funnier than I am! And why did he refuse to eat homemade jam? Et cetera. I told him I felt like I’d been living for the last 17 years with Ronald McDonald.

So much ire and sorrow over an apple cake, but of course this wasn’t just an apple cake. This was the beautiful bundt-shaped symbol of hundreds of dishes I've written about on this blog and hundreds of dishes I made before I started the blog, dishes that no one but me would eat. It’s depressing to cook for people who truly don’t care about food. One hand clapping, year after year. Over time it makes you feel stupid and lonely. Occasionally, furious.

It’s also a drag to face the wrath of a weeping wife when all you did was bake some dumb cinnamon rolls.

I was pretty nuts. He was pretty nice about it. You don't have to like food to be a decent person. Steam was let off. Peace restored.

She said, “Just a little powdered sugar icing drizzled on any cake and I bet they’ll eat it.”

Owen said, “That’s what I keep telling you, Mom!”