Sorry. Another long absence. I’ve spent many hours pondering the comments on the last post, comments that -- taken as a group -- have made me radically rethink personal grievances and long-held assumptions about cooking. Radically. I thought I was the only enthusiastic, ambitious home cook serving “deadbeat” eaters. Clearly not so. It’s a trend, a syndrome, a blight. I have thoughts!

So I’m just going to tell you what I’ve been cooking and shelve the dissertation for now.

I’ve now made all the rice bowls in Edward Lee’s Smoke and Pickles except the version with lamb, and I bought the ground lamb for that today. We love rice bowls. They’re great because you can customize based on your likes and aversions. We dislike rice bowls because you have to make fussy, fussy remoulade. We will probably never eat rice bowls again because of that, but it was fun while the remoulade lasted.

Unfortunately, it's impossible to find the recipes for the following rice bowls on the internet and I think I know why. You have to type out the remoulade recipe, then the rice recipe, then the recipe itself. This will deter even the most ardent plagiarizer, including me. But, if you have Smoke and Pickles, here are the last three rice bowls I've made, listed in order of preference. The salmon rice bowl and beef rice bowl described in earlier posts were also terrific.

-The lovely tuna rice bowl (raw tuna, avocado, pork rinds, hearts of palm, jalapeno remoulade) was crunchy, cool, spicy, and creamy. I love anything -- novel, movie, song, rice bowl -- that brings together such different and seemingly discordant elements and then reconciles them. The seemingly discordant elements here were not just textural, but cultural. The world seems momentarily whole when you're presented with a dish that contains sashimi, hearts of palms, and pork rinds. Make this. Don't skip those pork rinds, no matter how gross you think they are.

-The pork rice bowl was also fabulous. You make delectable pork sausage patties and fry. Serve atop rice with jicama sticks, and kimchi remoulade. It's been decades since I bought a jicama and I wonder if I will ever buy one again.

-The chicken rice bowls were not my favorite. You make chicken sausage patties and fry. Serve atop rice with orange segments, peanuts, and miso remoulade. Sweet, refreshing, burstingly juicy orange segments in a savory context? Blecch. All the other rice bowls I've made were much tastier. Tomorrow we'll have a verdict on the lamb rice bowl.

I also made Lee's cinnamon-honey roast leg of lamb. I marinated the expensive lamb for a day in a spiced buttermilk mixture and then glazed it with honey and cinnamon as it cooked. Not as good as it should have been given the special treatment and it brought me just a little closer to going off lamb altogether.

Per his request, I made Owen a John Gore (see photo at top) cake for his birthday party on Saturday. I told him I didn’t think I could pull this off artfully, but he insisted. I was right. 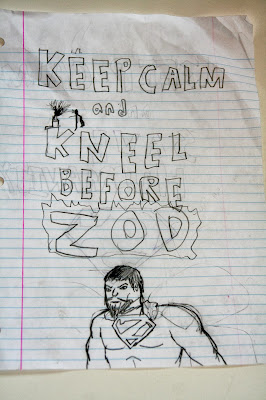 Labels: cake, smoke and pickles
Email ThisBlogThis!Share to TwitterShare to FacebookShare to Pinterest