Making blog posts out of molehills

You should know I'm a big fan of Smoke and Pickles no matter how much I might complain, which is what I’m about to do.

Tuesday night I cooked Edward Lee’s pork chops with ginger-peach glaze, a recipe that involves brining chops in a fascinating black syrup of gin and sorghum (or molasses) then searing them in a cast iron skillet. 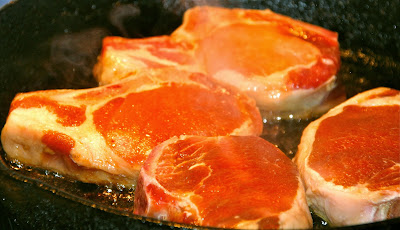 You spread peach glaze (3 fresh peaches, wine, honey, ginger) on the seared meat and crumble pistachio gremolata (garlic, pistachio, parsley) over the glaze. Put the skillet in the oven and 12 minutes later you have delicious, juicy pork chops with a fragrant peachy-nutty topping. Loved by all in the household.

But let's focus on the negative: After making the pork chops, there was more than a cup of peach glaze and roughly a cup of gremolata left over. There was more left over than I’d used and it wasn’t like I’d been stingy. How annoying. I checked Chowhound, where they’re also cooking through Smoke and Pickles, to see if anyone else was irritated by the waste of peaches and pistachios. No. No one was irritated. One cook remarked equably that he/she had tossed the extra gremolata into sauteed green beans. Another used it to flavor some beets.

I admire their resourcefulness, but I really didn’t want extra peach glaze and gremolata. Chef Lee can store extra glaze and gremolata in his walk-in refrigerator and use it on the next round of pork chops or maybe some fabulous new dish he dreamed up because he's an artist. It's like he just mixed a little extra paint.

I’m not an artist and our refrigerator is a hellhole of  juice boxes, caperberries, hoisin sauce, leftover pizza, mayonnaise, beer, about-to-expire cream, tuna salad, horseradish, sprouting carrots, and parmesan rinds. How I feel about my refrigerator is how Nora Ephron felt about her purse.

I hate to waste food, but it took me a lot longer to write this than it did to decide to throw out the glaze and gremolata. I waste food all the time and usually it's my fault, but this one's on Edward Lee. A shame either way.

Conclusion: Great pork chops. If you make them, cut the glaze and gremolata by two thirds. 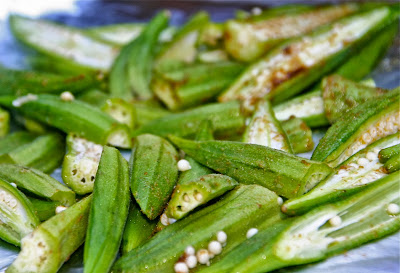 Lee’s warm roasted okra and cauliflower salad, which I served with the pork, was less of a hit. Oh, what am I saying! It wasn’t a hit at all. My friend Melanie and I ate it for lunch the next day so it didn't go to waste, but don't bother making this for picky eaters. Like you needed me to tell you that.

On the other hand, these quinoa chocolate chip cookies were a hit with picky eaters. Soft, crunchy, substantial. You can tell they’re healthy, but after 24 hours they're almost gone. The unholy power of chocolate chips.