Here’s something I regret all the time: the name of this blog.


Back when I started out, I gave zero thought to the fact that I was linking my identity to mild drunkenness. Shame! But if I had to go and do something foolish like that, why didn't I just use the word itself rather than a coy, girly euphemism?

I neither bake nor drink anywhere near as much as I used to. This past week, however, I did.

Drinking. I reconnected with various friends after the separation of the summer and that called for alcohol. During the course of the merriment, I mastered the pisco sour. I started out mixing the classic Peruvian cocktail in a shaker, but could never work up a significant head of foam. Then, on Saturday I mixed pisco sours for my friend Melanie in the Vitamix and they were nearly perfect. (Any blender would work, I just like to type the word Vitamix as often as possible.) These drinks were pale, pale, pale creamy green and atop the otherworldly liquid floated a layer of snowy meringue. Showstopping.

Last night Mark and I carted the Vitamix up to our friend Hilary's house in Petaluma and made pisco sours for her and her husband, John. I decided these pisco sours might be a little too tart. After leaving Hilary's, we drove the four minutes to my father's house where I made pisco sours for my sister and her husband. (My father tasted one and went back to his martini.) We added more sugar to the pisco sours and now they really were perfect. It had been a long, hot day, I was thirsty, and perfect pisco sours are dangerously refreshing. Everything after the second pisco sour is a blur. Back home, I fell asleep on the couch still wearing my clothes, setting a wonderful example for my impressionable adolescent children. There will be no more pisco sours anytime soon.

Into a blender: 3 ounces pisco, 4 teaspoons powdered sugar (more to taste), 1 ounce fresh lime juice, 1 egg white, a generous handful of ice. Blend until the ice is demolished and the drink foamy. Pour into a highball glass. Top with a dash of bitters. Serves one.

Yesterday I baked the rhubarb peach kuchen from Smoke and Pickles by Edward Lee, a Korean-American chef in Louisville, Kentucky, and took it to my father's as my contribution to that blurry steak dinner. Smoke and Pickles is full strange, intriguing dishes like tobacco cookies, a chilled squash soup garnished with pickled strawberries, rice bowls that contain kimchi and remoulade.  I didn't have peaches so I used nectarines in the kuchen and didn’t peel them, but otherwise stuck close to the recipe.  I wish it had been slightly more exciting as I want this book to amaze me. The kuchen was a good. I want this book to be better than good.

Also, I baked another batch of brownies, this time using a recipe that calls for cocoa powder rather than chocolate. These brownies are decidedly inferior to the brownies I made from The Essential New York Times Cookbook but still tasty enough that Owen ate ten in under ten minutes. Exaggeration, but not much of one. 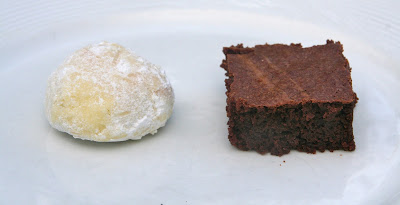 That's a Russian tea cake on the left. I rolled it in powdered sugar that I made in the Vitamix. A cup and a half of granulated sugar plus 1 tablespoon of cornstarch. Blend until powdery. Supercool.

I can’t wait to see where this Slate series on entertaining goes.