Again and again the same situation 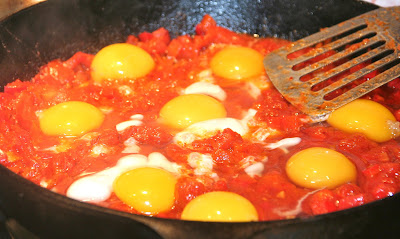 Shakshuka as cooked from Jerusalem by Yotam Ottolenghi and Sami Tamimi is a melange of red bell peppers, tomatoes, garlic, cumin, and harissa (North African chili paste) that you simmer until melded and delicious and in which you then poach eggs. Serve with bread and yogurt. BUT! Before you serve this magnificent yet simple dish, snap at your husband when he jovially (though not jokingly) wonders if he could have his eggs on toast as this looks "unconventional" and how does he know he's going to like the sauce? Tell him he has to try the food before criticizing. Glower. About 15 minutes later snap at your son when he says, neither jovially nor jokingly, that he's tired of the "weird" things you cook. When his father (ahem!) tells him to stop complaining your son says: "If I don't complain, how am I ever going to make change?"

Make change. Brood over those words. Eat in stony silence. Feel angry and disappointed and bitchy and deep down sure that this ongoing mealtime discord has to be your fault. Retire alone to the sofa to watch Circumstance, a movie about teenaged girls in Iran who like each other more than teenaged girls are allowed to like each other in Iran.

Back to first person now:  Circumstance was moving and disturbing. I recommend it. By the time it was over I wasn't mad anymore and no one was mad at me because we all basically like each other when we're not sitting around the dinner table.

Last night we didn't. We dined in front of The Walking Dead. I made Jamie Oliver's pasta carbonara with sausage meatballs which consists of linguine, olive oil, sausage, pancetta, cream, Parmesan, egg yolks, and lemon zest and tastes exactly like you would expect. I prefer shakshuka, but Owen ate the pasta carbonara like a walker with a fresh. . . no, that is rude. Owen ate a lot. He did mention that the pasta was "all lemony tasting," probably so I wouldn't get a swelled head. I wonder if he thinks that he is finally making change.
How do we go forward in peace and harmony and food that isn't pasta?

There's no need to try to answer that. Isabel is getting her driver's license and Owen sounds like James Earl Jones and the question is almost moot. Disappointing eaters. Good kids.

Don't let my dismal story scare you off shakshuka. It's delicious, easy, healthy, and not "weird" at all. The recipe from Jerusalem has been published here on Food52, though they've cut the quantity of harissa to 1/6 the original amount. I approve; my shakshuka was fiery. This is a totally different version of shakshuka and looks excellent too.