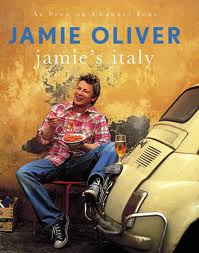 I've been choosing random recipes to cook before we leave for Japan and since there was a cauliflower in the refrigerator, made Jamie's cauliflower risotto last night. The recipe comes from Jamie's Italy but is also here.  Unless you are on a diet, MAKE IT. As Jamie writes at the end of the recipe: "So, so good!"

He is so, so right! And so, so enthusiastic!

His section on risotto begins: "You're going to absolutely love this chapter," but he often saves his loudest hurrah for the last line of a recipe.  He ends his recipe for eggplant parmigiana: "You'll love it!" Flash roast beef: "Tasty, tasty, and very gorgeous!" Grilled and marinated rabbit: "Simple, honest, and bloody good."

Owen declined to taste the risotto: "I don't like risotto, it's all gooey and unpleasing." I declined to care.  Since Isabel had late dance class and Owen was dining on yogurt, Mark and I watched the finale of Girls while eating the risotto.

A few words about Girls: I have come to hate this show. I'm going to have to think hard next season about whether my desire to know what people are talking about outweighs my dread of watching Lena Dunham stick sharp objects in her ears and Adam Driver do that thing he did in the penultimate episode. In every episode there are at least five moments when I want to bury my head in the sofa cushions and cover my ears. This is not counting my aversion to seeing Allison Williams do anything at all. Am I old and falling out of step? Or is the show in fact depressing and needlessly grotesque? Either is possible. When you fall out of step you don't know it. That is part of falling out of step.

We're leaving the house sitters detailed instructions and a bottle of iodine in case Natalie kids while we are on our trip. She's due on May 2, but is already big as a cow. Japan should be fun so long as North Korea doesn't drop any bombs. Thank you for all your suggestions. They are printed out and tucked in my bag. I will report.