Finally we hit our stride

My sister and I host family dinners on alternating Sundays and this past weekend was my turn, which is always both a burden and a thrilling opportunity to show off. I was hesitant about cooking from The Suriani Kitchen because the dishes haven't been universally wonderful, but I went ahead, the stars aligned, everything was outstanding, the kids ate a lot of challenging food, the adults drank just enough wine, and all was well in our little world, despite a loud debate about whether Clint Eastwood's Republican National Convention speech was embarrassing or effective. Those of us who grew impassioned/obnoxious apologized. Again, I am sorry, Dad. 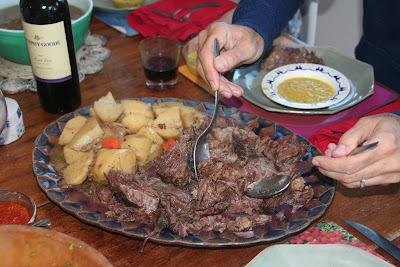 spicy beef pot roast -- Lathika George excavated this recipe from the vintage journal of a remote rubber plantation, which made it almost irresistible to me. The dish consists of chuck roast dosed with a truckload of Indian spices and braised for 4 hours. Here's the thing: I couldn't tell the difference between this Indian pot roast and an American pot roast. If pot roast was a person he would be a fat, merry older man with red cheeks who likes a glass of Port after dinner in front of the hearth. He's always genial company and spices can't change his essential nature, which is pleasant and accommodating. This particular pot roast accommodated 3 tablespoons of mustard seeds, 5 dried red chiles, cloves, cinnamon, black pepper, and garlic and he was still just an easy-going old pot roast. That is what I love about pot roast.

lentils with coconut milk -- The ubiquitous Indian legume porridge -- which often goes by the name dal -- is also very forgiving, very relaxed and mild mannered. I've made lots of dals over the years and don't think I've ever had a bad one. This version was very good. My 6-year-old niece drank it like soup and asked for seconds, which made me glow, but I think I've made better, richer dals so I will not go overboard and type the recipe.
kallappams -- This is where I want to use copious exclamation points, capital letters, italics, hyperbole. I loved the kallappams I made the other night, they are exactly the kind of dish I wanted to find in The Suriani Kitchen: New (to me) and totally delicious. Kallappams are thickish, spongy, coconutty pancakes, nutritionally empty, easy to prepare, and perfect for sopping up rich, spicy gravy. I've since found several recipes in other Indian cookbooks which look similar, and other recipes on the internet. I can only vouch for this recipe, though I would be open to variations. The recipe reflects my adjustments and opinions.

1. Grind the soaked rice with the water in a blender or food processor for a few minutes until it becomes smooth and milky and the rice is broken into small bits. Add the coconut and cooked rice and grind for 2 minutes more.

2. In a bowl, mix the rice batter with all the other ingredients. Cover with a damp towel and let sit in a reasonably warm place for a couple of hours.

3. Pour 3/4 cup of the batter on a hot, lightly greased skillet (you really don't want much oil on the skillet because the pancake will soak it all up) and cook over medium heat until light gold on each side. Don't try to flip the pancakes too soon; wait until they're pretty cooked. Repeat until all the pancakes are done.


Double-decker apple pie. There are Suriani desserts I need to try, but it's easy to put off steamed rice paste porridge when hundreds of ripe apples on our tree are yelling at me to make pie or cake. I went with a double-decker pie from Southern Pies by Nancie McDermott: crust filled with apples, topped with crust, topped with apples, topped with crust. It didn't sound promising to me because I'm a filling person, not a crust person, but in fact this pie was terrific.
Posted by tipsybaker at 9/25/2012 07:27:00 PM

Labels: pie, The Suriani Kitchen
Email ThisBlogThis!Share to TwitterShare to FacebookShare to Pinterest