One day I'll go back to coffee, but meanwhile

India is how I imagine much of the world was until a century ago: unregulated, fecund, profuse, haphazard, earthy, dirty, vital. It's like a giant compost heap, and I mean that in the nicest way. Driving through San Francisco on our way home from the airport I thought, where are all the people? Where are all the carts? The animals? Where is all the life?

Back to cookbooks, with preamble.

The highlight of the trip to India, for me, came on the last day when our bags were packed and I was counting the hours until takeoff. We were staying in New Delhi, which is (relatively!) clean and orderly. We decided to visit Old Delhi, which is not. We found ourselves in a byzantine warren of alleys and streets that I imagine looks little different than it did in 1912. It seemed to stretch forever in all directions, both temporal and spatial, and was teeming with people, spice shops, silk shops, kitchenware shops, ribbon shops and at least one man with a cobra in a box. I saw things I have never seen, like sticky, wet cakes of asafoetida. I saw people selling khoya and paneer and milk pails and stands that have been producing deep-fried snacks since the 1870s. Vendors were squeezing green oranges into juice, which was almost irresistible given the heat, as were the open bottles of fresh lime soda. I saw pots of chai boiling on little burners right there on the street and served in tiny cups on overturned crates. There was also a lassi stall where they served the yogurt in disposable terra cotta cups. Walking around here was my favorite hour of the entire trip.

Unfortunately, I did not feel it was prudent to eat those snacks or drink anything at all, but in another life, on another vacation, traveling without an 11-year-old boy, married to a doctor who could hook me up to a Cipro drip? I would.

Twelve hours later at the airport bookstore I bought:

-Camellia Panjabi's 50 Great Curries of India. This is a beautifully illustrated and thoughtfully written cookbook. Panjabi begins by explaining that what most Westerners know of Indian cooking is actually Punjabi cooking, from one small corner of India, and that there is much, much more. Which is true. Then she explains that she sifted through the mountain of regional Indian recipes and pulled out the very best, most classic recipes. I planned to start cooking from this book the second I got home. Alas, once I did, perusal of negative amazon reviews made me doubt the merits of the book. What do I do? Should I try a few recipes just to see? I'm undecided. I hate false starts.

-Delhicious by David Elias. Bright softcover with lots of gorgeous photos of people, cows, and street food accompanied by recipes for things I wanted to try, but couldn't, like limeade with black Himalayan salt. (You have to be an incredibly thirsty Westerner walking around Delhi to understand how alluring such beverages can become. Trust me on this.)

-The Suriani Kitchen: Recipes and Recollections from the Syrian Christians of Kerala by Lathika George. How could I not? Just the title alone. I am especially intrigued by the crab curry and banana jelly. Amazon reviews are glowing, though no one seems to have cooked from the book. Do I plunge into this one?

Thirty hours later, we got home and I fell into a fathomless pit of sleep.

The next morning I pulled out Delhicious to try the recipe for chai. You all know about chai, right? It's a hot, milky, spice-infused black tea that is served in India everywhere, at all times of day. It is supposedly healthy because of the salubrious spices. I don't know about that, but I see no reason you couldn't make it with green tea, which would definitely be healthy.

The ingredients in the Delhicious recipe -- whole cardamom cloves, cinnamon stick, tea -- were listed out of order. That was a bad sign. I proceeded, although the quantity of tea leaves seemed scant and the tea was not steeped. It was no surprise that the chai was weak and pale. Big demerit for Delhicious. I'll keep it for the photos, but will probably not cook from it.

The next morning I made chai according to this Kitchn recipe and it is superb.

The next morning, I was colossally tired and made coffee, thinking it would perk me up. I fell asleep mid-morning.

Yesterday, I made chai according to a recipe from this blog, started by a couple who went on a chai pilgrimage. It was excellent, but I didn't like waiting for the water and ginger to boil for 10 to 15 minutes.

This morning, I combined the same couple's house chai recipe with the Kitchn's, and it is the best chai I've made. This is what I did:

1. Start heating the water while you slice the ginger. Add the ginger to the water along with the cinnamon stick. Let this come to a boil while you gather your other ingredients at a leisurely pace.

2. Add your other other ingredients. Bring the tea back to a boil. Turn off heat. Steep for 2 minutes. Strain into a teapot or very large mug and drink immediately. Serves 2.

On another subject, I just read T.C. Boyle's new novel, San Miguel. In closing I will share the Depression era dinner menu cooked by one of his characters:

"In addition to two legs of lamb, mashed potatoes, chili beans and the traditional hot sauce, she was planning a pudding of canned pineapple, odds and ends of bread, cornmeal, sugar and leftover bananas that had gone black and densely sweet since the last delivery, the whole to be tied up in a muslin sack and steamed in her big pot. To start, there'd be clam fritters wrapped in bacon, and a half dozen loaves of sourdough bread. . . "

It sounds repulsive, that pudding, but I can't get it out of my head. 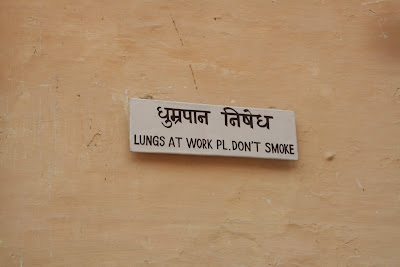 Labels: India
Email ThisBlogThis!Share to TwitterShare to FacebookShare to Pinterest