I love the grab-bag aspect of cooking from food memoirs. I love that you can find recipes for cookies next to tamales next to Provencal breads next to strawberry jam and they're all tied together with story.

I'm continuing to cook through Bread and Chocolate by Fran Gage. Monday we ate farfalle with the roasted pepper sauce that appears in the chapter about olive oil producers. It was very simple and tasty, this sauce. You char four meaty red bell peppers, peel and seed them, then puree with mustard, a little vinegar and, of course, olive oil. A good recipe to have in your repertoire.

Tuesday, we had Gage's penne with saffron cream sauce, which appears in the chapter on the staff lunches she served at her bakery. Saffron! Lucky staff. This was also very simple and tasty and remarkably expensive.
That seemed like enough pasta for the week. Last night I was going to make Gage's oyster stew, but when I went to open the jars of oysters purchased a few hours previously, noticed that one of the lids was bulging. This led to the discovery that they were a week past their sell-by date. You're slipping, Whole Foods.

So I made pasta again and improvised a sauce, which I do a lot. It can be useful in clearing out the refrigerator. Last night's pasta was spectacular so I'm going to tell you what I did. You can skim the beginning of the "recipe" but pay attention to the end.

I started with a 2-inch stub of dry salami, which I chopped into pieces the size of chocolate chips. Then I chopped up two strips of lean bacon and fried them in a small amount of olive oil. Once the bacon was soft and had rendered most of its fat, I added half a red onion (chopped), and the salami. I let this cook until it was almost impossible to distinguish squares of onion from squares of bacon from bits of salami. I found a half-used tube of tomato paste and squeezed some in and cooked some more. Added salt and pepper. I cooked fusilli, tossed it with the sauce. And now comes the part you should pay attention to: I took some goat's milk ricotta (though any kind would do) -- maybe a cup and a half -- and mixed it into the hot pasta but not too thoroughly. Some of the ricotta melded with the sauce, but most of it remained in big, cool, creamy lumps. You're eating your salty/lusty pasta and instead of getting more salty/lusty in the form of Parmesan, you hit on a lode of cool, sweet and creamy ricotta. It was just fantastic.

This improvised pasta was the best pasta of the week. We ate it in front of the TV while watching Game of Thrones, a show that always makes me want to gulp wine out of a goblet. We don't ordinarily watch TV while we eat, but want to finish the season of GOT before everyone disperses for the summer. It was so very pleasant and harmonious, I'm thinking we should do it more often.

I also made Gage's chocolate brioche with chocolate bits. It's a little dry and severe on its own, but I predict it will make amazing french toast. 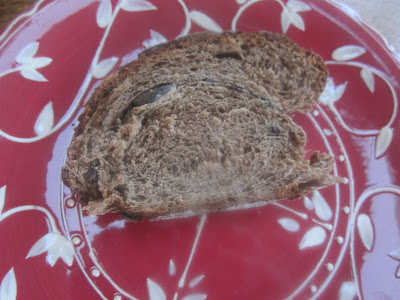 Labels: Bread and chocolate
Email ThisBlogThis!Share to TwitterShare to FacebookShare to Pinterest