I was pleased with this contribution until I put the tin on the table and took a good look. Nope. You serve cookies like these at a kindergartner's birthday right after the clown finishes up, not to a flock of delicate 18-year-old gazelles in 7-inch heels. Although the cookies were fantastically delicious, no one touched them. Wrong occasion. I will provide the recipe shortly, but I need to iron out one kink in it before I do.

Interesting fact: Isabel and her friends went to prom without dates. 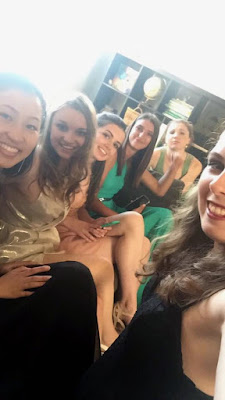 Cause they're a buncha wallflowers, obviously.

Seriously, though, things have changed since I went to the prom. (Like no one says "the prom," it's just "prom.") Exuberant, eminently presentable girls like these would have had no trouble getting dates and if for some reason they did, they would have stayed home. Girls certainly did not go off to prom in big, boisterously happy packs. What does this all mean? Explain it to me! 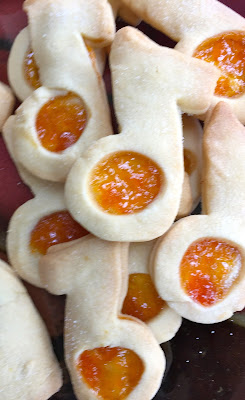 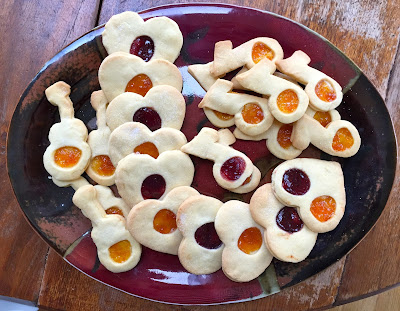 Jammy dodgers are a British butter cookie sandwiched with, as you probably guessed, jam.  I've made a few versions, but Gellatly's is the best and easiest: you put all dough ingredients into the food processor and push the button. Refrigerate dough. Roll it out, cut shapes, cut a little hole in half the shapes, spoon jam onto the other half, sandwich, bake. The cookies sold out. Recipe here. You should try it. (Apologies, but you do need a scale for this. If you don't have a scale, you should think about getting one even if you don't want to make these cookies. Once you start baking by weight you won't want to go back.)

And now for something completely different.
A few nights ago I mixed my first-ever stinger, a classic cocktail that is made of equal parts creme de menthe and brandy. I decided to take a picture because it was such a cool-looking, Scope-colored drink, but when I saw the blurry shot I forgot all about the stinger, so dazzled was I by my own youthful allure. Boy, was I pleased! The smudged camera lens had taken decades off my age.

The blurry photo gladdened my heart and gladdens my foolish heart as I look at it now, even though I know exactly what I really look like. This is called "willful delusion" and I highly recommend it to anyone who is starting to feel bad about her neck. I have given this some thought and decided that at a certain age it's perfectly ok to embrace the blurry photos and erase the realistic ones. I also believe it's preferable to remove your glasses before checking your make-up in the car mirror midday; you really don't want to see yourself that clearly. And I'm sure everyone can agree that it's essential to detach any satanic magnifying mirrors you installed in your bathroom when you were 30. Be on the alert for these horrible mirrors in hotels, especially expensive ones, and drape with a hand towel promptly lest they ruin even one minute of your vacation. In short, there is nothing to be gained from close, realistic scrutiny of one's visage after age 45 and much to be lost, like high spirits, self confidence, and money. If you only ever see blurry pictures and are careful about your mirrors, you will have more bounce in your step and never require Botox.

Do I really mean this? I just might. Full manifesto coming soon.

Back to the stinger. I made it after reading the cocktails chapter in the endlessly intriguing and irritating Prune. Gabrielle Hamilton's conceit in the book is that she's addressing her restaurant staff, and at the end of the stinger recipe she writes: "Give me a heads up if anyone orders this; it's rare that anyone does but I'd like to meet them."

One day I will go to Prune, order a stinger, and see what happens.

I enjoyed my homemade stinger, but one was definitely enough. In a cocktail, that's a feature, not a bug.

I'll finish with an audiobook recommendation: David Rakoff’s rhyming novel, Love, Dishonor, Marry, Die, Cherish, Perish, is a small, sui generis masterpiece. Characters include a lonely girl, a horrid socialite, a mistress, a spurned husband, and a gay cartoonist. Topics range from romantic anguish, to art, sexual liberation, the culture wars, and AIDS. The narrative voice is by turns silly, highbrow, bitchy, tender, furious, funny, and rueful. David Rakoff's actual voice (he narrates) is hoarse and weary, but he delivers his lines with a relish and poignancy no actor could ever match. He died of cancer at 47, something like two weeks after he finished recording. Such a loss. Such a strange, lovely audiobook. I've listened to it twice and will probably listen to it again before the week is done. Highly recommend.
Posted by tipsybaker at 6/09/2015 11:05:00 AM