Unhinged by Dermanyssus gallinae and in love with Bon Appetit

Where have I been? I've been cleaning.

The chicken saga is an integral part of the blog so I feel compelled to share, but I haven't exactly been aching to write about this horror show, the hours of sluicing the coop with Clorox and watching the unsettled mites swarm out of the woodwork, the compulsive strewing of every surface with diatomaceous earth and picking scores of arachnids the size of this . off of my arm and showering multiple times in a day and worrying that these bugs will somehow come to infest our human home. And then there was the unforgettable morning last week when Owen, who'd come straight from feeding the chickens, was kicked out of the dentist's office because some mites on his T-shirt found their way onto the chair. The hygienist wouldn't even have noticed if he hadn't pointed them out, but I don't blame the dentist for asking us to reschedule. Later they left a message saying they'd consulted an exterminator, which was an overreaction and thoroughly mortifying. I'm not sure I can show my face there again. Do you know any good dentists in southern Marin County?

I've been so rattled by the whole mite situation, so creeped out, obsessed, and frustrated that I'm ready to condemn the coop and call it a day with the chickens, but Owen says, "We can beat the mites, Mom, we can do it!"

We shall see. Enough about that.

Compared to cleaning the chicken coop, cleaning the pantry has been a pleasure.
A few weeks ago, I bought concord grapes to make sherbet, but couldn't find the ascorbic acid, which I use in my grape sherbet. I searched and searched and ended up paying $14 for a new jar. Several days later I found the old ascorbic acid right there in the pantry, hidden behind, I don't remember exactly what, but let us say a bottle of expired hoisin sauce, an unwanted box of strawberry Jell-O, and a few dozen splits of dessert wine inherited from my mother.

This kind of nonsense happens all the time and I decided it must stop. I took everything old or oldish that I didn't know what to do with out of the pantry to use up.

A number of boring dishes (Jell-O, pumpkin bread) have resulted from the pantry project, but also some strange, fantastic meals, all thanks to my new love, Bon Appetit, which I picked up one morning while waiting in the lobby of the vet's office.

I hadn't looked at the magazine in years and don't know whether it's dramatically improved or whether I'm just seeing it with new eyes, but when the receptionist finally ended her phone call, I flourished the copy of Bon Appetit and said:  "I have to subscribe to this!" I wasn't even hinting and she said, "Oh, take that. No one here wants it."


It was as if the September 2014 issue had been written for me and my pantry. That night, I made the pork sausage with coconut-chile sauce and lychees, a recipe I never would have considered if I hadn't been trying to get rid of expired coconut milk and a can of lychees. It sounds bizarre, but is the most fabulous thing I've cooked in ages. Easy, too. There's so much going on in this dish -- salty bits of pork, creamy coconut, crunchy peanuts, fiery pepper, herb, lime. But the critical element is the lychee, which adds juice, sweetness, and a wonderfully fleshy textural element. You must try this. Here are my suggested amendments:

-serve it on rice
-you can substitute any small hot chile for habanero
-you don't need 1/2 cup of oil to brown the pork -- I'd go with 1/4 or 1/3 cup
-unnecessary to cool the coconut milk
-if you don't have shichimi togarashi just skip it or improvise with some other red pepper (flakes, a little cayenne)

The next night I made crushed cucumbers with lime pickle and coconut milk, another intriguing dish from Bon Appetit that enabled me to move one of two jars of lime pickle from the pantry to the refrigerator. (Everyone should have such a stimulating hobby.) Cucumbers aren't the sexiest vegetable, but that lime pickle-coconut sauce was unique and delicious and a creative cook could easily find other applications.


The recipe for chestnut coffee cake, which Bon Appetit took from Nico Osteria in Chicago, used up a small sack of Chinese roasted chestnuts that had been hanging around the pantry forever. The cake was lovely, although, as is always the case with streusel-topped confections, I wished it was streusel all the way through. 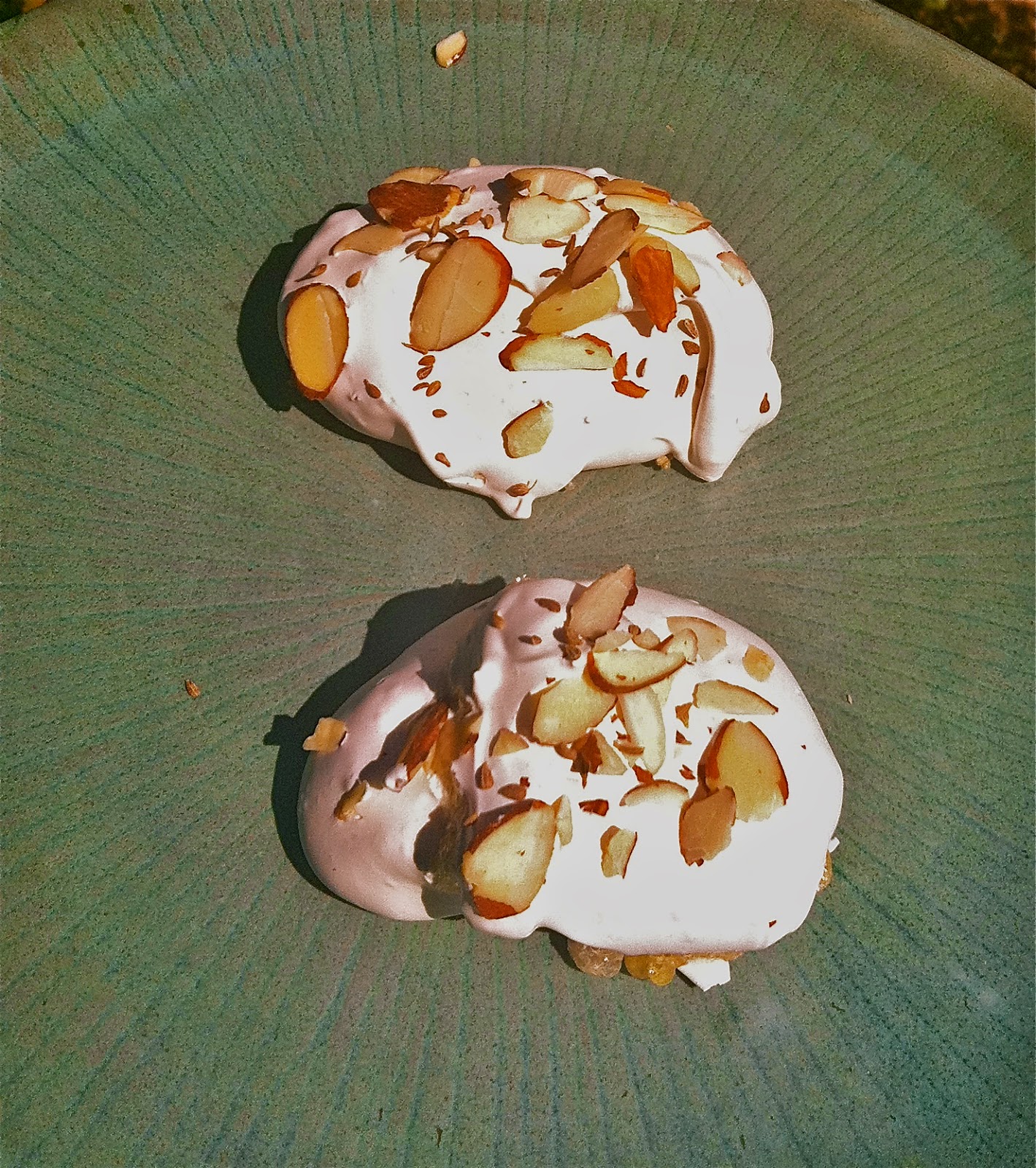 I also made some odd, wonderful anise-almond meringues, which made a tiny dent in my egg white collection. They're chalky-gooey in the way of ordinary meringues, but taste like licorice. I have to say, though, that the sprinkling of anise seeds made me think of red mites. I may need an exterminator for my psyche.