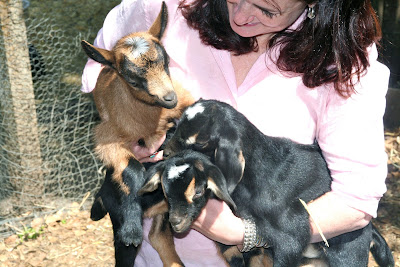 Yeah, I guess the new goat babies are sort of cute. Check out the ears on the brown one. Now look at the ears on either of the black ones.

Back in December, we bred Natalie to a Nigerian Dwarf (upright ears), but he didn't seem tall enough to knock her up, so a Nubian buck (floppy ears) was brought out a few minutes later. Now I think we got kids from both of them. Score! We all favor the runt because people always favor the runt.

I'm continuing the policy of cooking only one item every night, although I'm allowed to make dessert if the mood strikes. I harvested half a laundry basket of monster fava beans on Monday and braised some of them with sage and pancetta, adapting a recipe for peas in The Zuni Cafe Cookbook. I put them on the table next to the rotisserie chicken. (Note: I asked Mark to choose the next 10 dinners, but he declined the offer.)
"No fava things for me," Mark said jovially. "I'm on a diet." Isabel tried the favas and disliked their texture; Owen said they didn't taste good. I alone ate the fava beans. Must every blog post include an anecdote of this nature? Apparently. Here's another from the same night:


For dessert, I made David Lebovitz's chocolate-banana ice cream. I used the version of the recipe printed in Ready for Dessert,  but it is also here. It's a super-cool recipe: Puree bananas, melted chocolate, milk, Bailey's Irish liqueur, and rum. Freeze. No machine required. The resulting ice cream is dense, icy, and complex, like a spiked fudgesicle. Mark took a bite and said, "Nope! Too alcoholic." He then served himself a big bowl of Snickers caramel swirl chunk and we sat down on the sofa with our different ice creams and watched Robin Wright have hot flashes on House of Cards. Whatever. The day we start watching different TV shows in different rooms, that's when I'll start to worry.

Last night I made fettuccine with preserved lemon and roasted garlic from The Essential New York Times Cookbook because it looked easy, delicious, and unusual. It was all three. Everyone in the household ate it without complaint. Next time I'd mince the preserved lemon finely like the recipe says, rather than chopping it coarsely like a lazy person does. I'd also add more cheese. It's a great recipe to have on hand for those occasions when you really, really, really don't want to go to the supermarket, which for me is always. Try it.