The internet was too much with me

Note: This post was eaten after I published it this morning yet saved on the computer in an early draft form. I have restored as best I can remember. Mysterious.

I've been out of sorts, to put it mildly. Two changes in daily life seem to be helping the situation:

1. Last week I put the MacBook on the piano and the Beethoven bust on the MacBook and set some rules about my internet use. The internet had started bumming me out on a daily and sometimes hourly basis. It seemed like breast cancer was always "trending" and people were falling into sinkholes and strangers wrote stupid, crass comments on stories I loved and friends weren't emailing me back quite fast enough which was probably because I'm a drip and maybe there was a cheap Oriental rug on eBay that would work in the hall and shouldn't I check even though I always feel like a dupe when I buy anything on eBay? Et cetera.

I haven't missed that place at all. I keep a list of things I need or want to do on the internet and go online twice a day. I can check favorite sites and pay bills an see what movies are opening on Friday and write my blog, but when I'm done with the list I have to stop and put the MacBook back on the piano and Beethoven on top of the MacBook.

It's a little dull and static out here at first and I don't have a new appreciation for daffodils or cherry blossoms or anything like that, but I'm definitely less miserable. The real world is much calmer than the virtual one, which is funny given that it's only in the real world that cancer and sinkholes and almost everything else actually happens.

I'm not preaching about this, by the way. I spent many years merrily bouncing around the internet and there was nothing wrong with that until suddenly there was.

2. As I mentioned, I now cook only one dish for dinner every night. Huge! I can't believe I didn't figure this out 10 years ago, but there are lessons you can only learn in weary middle age. Like many Americans, I grew up believing that a proper dinner meant three different foods on the plate and I was determined to produce such a triangle every night. When I had the energy, which I could sometimes dredge up with a goblet of wine, I aspired to a quadrangle that would include dessert.

What is the shape of my new dinner model? A large dot?

A few nights ago I made Smitten Kitchen's excellent cranberry bean, walnut and feta salad. I messed with the recipe a little (more beans, more walnut, more feta as the dish was a little dressing heavy.) Much loved, perfectly sufficient. It's not like anyone in this household is malnourished.

The next night I chopped up some chard stems and sauteed them in olive oil then put them in the pot of leftover beans and bean broth. I added pasta shells and served with Pecorino cheese and a dollop of cold ricotta. Casual. Improvisational. Elegant. I felt like Tamar Adler. No one asked where the salad was.

Last night I made the soba with walnuts and dipping sauce from Japanese Farm Food. I was tempted to cook some vegetables to fill out the plate nutritionally/texturally/visually as soba noodles are cold and gray and stark, but I willed myself to stop because I really had no desire to cut up cauliflower or peel carrots and then nag everyone to eat them like I've been doing for years and years. We'll eat vegetables another night in soup or pasta or whatever. I was relaxed and the kitchen was miraculously tidy for 7 p.m.

Friends, I don't think I'm ever going back to the triangle.

On another subject, I baked David Lebovitz's famous ginger cake and took it to my sister's house for dinner on Sunday. My father, who is not an effusive man, gasped when he tasted it and has sent me two emails praising the leftover cake he took home. It's crazy how much people love this dark, damp, puddingy cake. I say "crazy" because this is the second time I've baked it and it contains too much molasses for my taste. But it's likely that any molasses is too much molasses for me just as any dark chocolate is too much dark chocolate for me so I'm discounting my own judgement. If my father, sister, husband, daughter, son and half the people on the evil internet all love a cake, it is an amazing cake. The recipe is here. 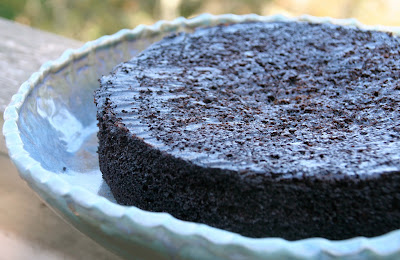