You're with Stupid Now 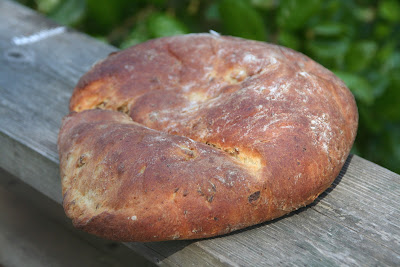 I baked the potato bread from April Bloomfield's Girl and Her Pig on Sunday. It rose into a magnificent mound of pale dough and then collapsed in the oven to resemble a deflated football and despite sounding hollow when tapped on the bottom, was almost floppy when baked, with a soft crust. Sliced, it was flecked with potato skins and there were whole seams of mashed potato, as you may be able to see with your magnifying glass: 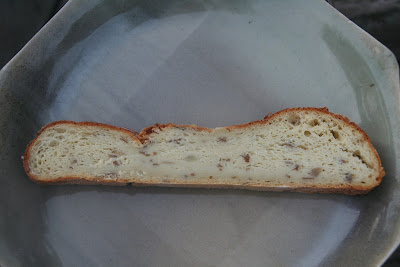 Bloomfield says of the dough: "It's okay to have a few odd lumps of potato."

Did I allow too many odd lumps of potato?

Having said all that, this was a bread you keep eating because it's so tender and salty and delicious, like a good dinner roll. You couldn't make a proper sandwich with it as the loaf was very flat and the slices resembled biscotti and were too floppy to hold anything anyway. I'm pretty sure this isn't how the bread turns out when Bloomfield makes it and whether the fault is in the recipe or my execution I will never know because I'm not going to pursue this bread.

Moving right along, I'm going to be honest with you (as when am I not?) and announce that I resent Nancy Silverton's Sandwich Book. Fiercely. First of all, the leftover leg of lamb sandwich that calls for roasting a leg of lamb. I will not be making that sandwich.

Second, the wastefulness. Monday, I made her grilled cheese sandwiches with marinated onions. Marinating the onions in oil and vinegar softens and mellows them and they marry well with the Gruyere and this was altogether a better sandwich than the Smitten Kitchen grilled cheese with jammy onions. Except Silverton has you marinate twice as many onions, maybe even 3 times as many onions, as you can use on those sandwiches. Now I have a big bowl of marinated onions in the refrigerator and if I was a chef I would find a way to feed them to paying customers, but I'm not a chef and they're just one more thing I have to worry about using or worry about wasting.

Third, the carelessness. Feel free to call me a moron like my husband did. Alright, he didn't actually call me a moron, but when I explained why there was no dinner when he got home last night, he looked at me like he does when I spend 10 minutes trying to turn on the TV with the remote.

I was going to make Silverton's portobello, braised endive, and teleme sandwiches. You start by preheating the oven to 400 degrees F then putting halved endives in a baking dish with some cream, stock, herbs, and salt. Then you put the mushrooms in another dish (or two -- these mushrooms were giant) with oil and balsamic vinegar. Cover your dishes tightly with plastic wrap and cover the plastic wrap with foil and bake for 30-40 minutes. At the end of this time, you remove the foil and make holes in the plastic wrap to vent steam and bake the vegetables some more.

I did think as I stretched plastic wrap over the endives and mushrooms that I'd never put plastic wrap in the oven before and wouldn't it melt? I scanned the recipe for mention of fancy, heavy-duty chef's plastic wrap, but there was none and you never know what miracles those scientists have worked with plastic in the last 20 years. I had other things on my mind and forged ahead.

You know what happened, of course. Because you are smart! After 40 minutes, I lifted the foil and the plastic wrap had vanished. Closer examination revealed thin, wrinkled clumps of plastic stuck to the dish and atop the vegetables and I tried to pluck these out so we could eat the endives and mushrooms. Then I decided against it. I'm trying to be less cavalier about eating plastic.

I just now read the warning on the box of Safeway plastic wrap and feel even stupider.

But Silverton should have specified! We're not all brainiacs.

This morning I got up and realized I have to cook a ham bone for 2 hours and then parboil kale, saute just the kale stems with onion and garlic, pick the meat off the ham bone, cook the greens in the ham broth for 30 minutes and then I will have one of the components ready for Silverton's long-cooked greens, poached egg, and fontina cheese sandwiches tonight.

I may not last long with this book.

My friend Hilary turned me on to a blog that I find crazy, tough, funny, and sometimes very useful. You might agree. This is it. ((Note: She has written some posts that I don't care for AT ALL, like this one, which was just brought to my attention by my friend Mary.)