Time to drive home and write some resolutions

I did everything I set out to do in L.A. except finish writing the Victoria article, which is in progress. I am typing this as fast as I can because forces in the family are pressuring me to get on 1-5 and start driving north a.s.a.p.

Brief and loosely organized recap of trip, in case anyone is interested:

At Baco Mercat we were served huge amounts of ridiculously delicious food and it was remarkably cheap given that four of us ate to the point of pain. The cuisine was Japanese-Southeast Asian-Spanish-Middle Eastern-Italian-American and I know that sounds crazy and unappealing, but somehow it worked. More than worked. This was the best meal of our trip and there was no dissent among our oft dissenting family and I can not recommend this restaurant more strongly. If you don't believe me, believe Jonathan Gold.  The shrub cocktail was not potent and syrupy like a standard cocktail, but perky and refreshing and it did not give me even a slight buzz which was fine. I sometimes enjoy a clear head. The cocktails at The Varnish, on the other hand, made me very boisterous. This is one of those dark speakeasy places that have become trendy. My favorite drink was warm milk punch served in a teacup. It was too dark to read the make of the teacup, but it felt like fancy bone china and had dainty flowers all over it. I had never drunk milk punch and I can feel an obsession coming on. After our drinks we had French dip sandwiches in the adjoining restaurant, Cole's, and I reflected for the 1570th time that it is not alcohol that makes me fat, it is the enthusiastic eating that follows. I should add that The Varnish neighborhood is disgusting. I would have chosen a softer adjective had a homeless woman not tried to kick me as we crossed the street. I'm sure she had her reasons, but I did not appreciate the gesture. Zero Dark Thirty was electrifying. David Edelstein felt dirty for enjoying it. I didn't feel dirty. I would rather watch waterboarding than This is 40.  We saw lots and lots of other movies while we were in L.A. Owen and I squeezed in an early morning screening of The Impossible, which I cried my way through. We also saw Lawrence of Arabia and a double feature of It Happened One Night and Holiday, which everyone should see every 5 years. Those movies never get old and Clark Gable still has it. I had currywurst yesterday from a little place near our hotel; I've noticed a bunch of curry sausages restaurants in our drives around town and I had to try it. Wonderful. Soft sliced bockwurst under a blanket of spicy red curry sauce. If you have a chance, you should try this. We had a fantastic lunch at Forage in lovely Silver Lake and though I didn't get to meet the pastry chef, I did admire what I assume was her work, which included an adorable and delectable miniature gingerbread house that I got all to myself while the rest of my famly fought over the chocolate peanut butter tart. 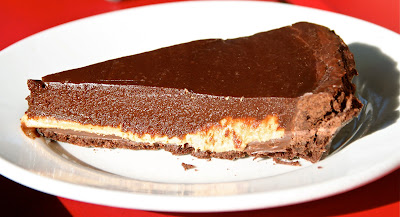 Oh, there was more, much more. It was a really fun trip. I feel better about everything -- self, family, world -- than when we left home. A week ago I wasn't sure what I was going to resolve for 2013 but after this trip I definitely need to lose a few pounds. Even about that I feel cheerful and optimistic. The lesson in all of this -- which some commenters on the last post noted and which Lawrence of Arabia, It Happened One Night and Holiday and the last few days all confirm -- is that adventure and fun and the people we love are always a better choice than cleaning the house alone. That's as good a thought as any with which to start the new year. Happy New Year!