Own too many cookbooks, watch too much TV 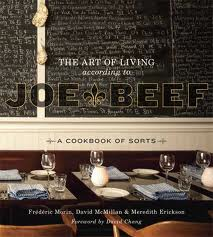 I predicted Food52's annual Tournament of Cookbooks would end in a showdown between some combination of Tender, Super Natural Every Day, and Mozza. I was so wrong.

I basically just picked the books I knew. That was feeble. I am now educating myself on the three titles left standing. They are:

1. Joe Beef. Bought it. Tremendous book.  Love everything about it from the writing to the bison taxidermy to the absinthe glasses. I love everything about it except . . . the food. The photograph of the trussed fish with milky eyeballs on page 33 turns my stomach, as do shots of the marrowbones stuffed with vegetables and the whelks with escargot butter. Here is a short list of the recipes in the book that trigger nausea: horsemeat topped with a fried egg, Velveeta eclairs, chicken skin jus, chicken skin tacos, mackerel benedict, squid stuffed with lobster, cornflake eel nuggets, pork fish sticks, Jerusalem artichokes with ketchup.


And yet I can absolutely see why this big, engrossing book has fared so well in the Tournament and think it probably deserves to win. It just doesn't make me hungry.

2. Milk Bar. We're having a long-planned party tonight for which my friend Lisa and I are making David Chang's famous pork dish. (The meat has been in the oven for 5 hours now and hopes are high.) This seemed the right occasion to try a dessert from Milk Bar, so Isabel baked a batch of the compost cookies (choped pretzels, ground coffee, potato chips, chocolate chips, butterscotch chips) last night. I am predicting they will be great. I completely endorse Kim Severson's decision to advance this book, however wacky, unhealthy, and impractical, over Nigel Slater as I am less enamored of Tender than the indignant commenters at Food52.

3. Mourad. By coincidence, Owen and I ate at Mourad Lahlou's restaurant, Aziza, the other night. (We are trying to eat at every restaurant on Geary Boulevard in San Francisco, in order, and Aziza was next.) The meal was delicious, but really expensive. I was going to buy the book for $40 from the restaurant, but after paying $28 for a single exquisite short rib, decided to wait until I got home and order it for $20.11 from amazon. I find the book cold, forbidding, and cheffy and sort of regret the purchase.

Which of the three will take the gold? I predict Joe Beef, but my record is not good.

And now, veering off from cookbooks: After our Aziza dinner, Owen and I went to see Albert Nobbs. You should see this sweet movie; don't let the hideous previews turn you off. It was mildly inappropriate for Owen, especially a startling bedroom scene involving Mrs. Bates, who seems to have gone AWOL from Downton Abbey. But I guess you have to learn about oral sex somewhere and there are worse places than at an art house movie with your mom. I sure hope so.

And speaking of Mrs. Bates, I am sadly afflicted with Downton Abbey fever. It's going around and it's pathetic, but also harmless so I'm letting it rage. I daydream about the clothes, the clinking tea cups, the thwarted romances. Especially the thwarted romances. For a while, I had a mad crush on Bates. Mad in several senses of the word, as Bates is a paunchy, limping fiftyish valet, not the obvious choice for a crush, but, with all due respect to Cynthia Nixon, who chooses? Lately, however, the odd Bates crush has been replaced by unswerving devotion to Matthew. Which requires no explanation. I am now ready to tape his photograph to the inside of my locker. But I don't want him for me! Selflessly, I want him for Mary the same way I wanted Jim for Pam, Tim Riggins for Lyla, Jordan Catalano for Angela, Sawyer for Kate, the Sheriff for the Widow. And on and on.

Think of all the books I could have read.

Downton Abbey is a ridiculous show. Highly recommend it.

Must go baste the pork and set the table. Full report tomorrow.