Just food, for a change 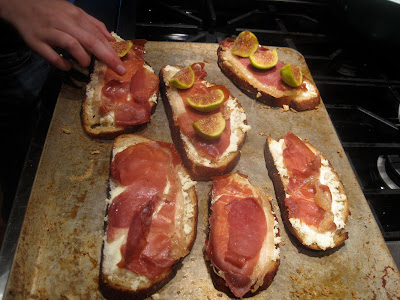 All summer the fog sat on us like a duvet, and then, out of nowhere, comes this crazy heat wave. Last night's dinner was "light" on account of the weather. I put light in quotes because while its individual components sounded light -- an eggplant salad, some open-faced sandwiches -- this dinner was actually extremely filling.

Everything came from Barbara Lynch's Stir and it was all beyond great. Isabel made fig, ricotta, and prosciutto tartines which were exactly what the name describes, but also included a "drizzle" of honey and "confetti" of fresh mint leaves that you "shower" on top just before serving. I love it when cookbook writers use juicy words like that. Lynch calls for black figs, but the only decent figs at the grocery store were green, so I bought those. The recipe incorporates contrasting flavors and textures -- creamy, salty, meaty, sweet, crunchy, minty -- and I loved these sandwiches immoderately.
We also made the eggplant with dried pear-pine nut vinaigrette and feta. 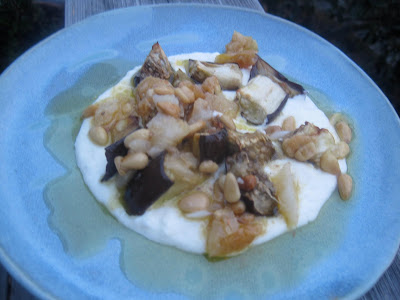 As you can see, this design-intensive composed salad does not play to my food-styling strengths (or lack thereof), but it's one of the tastiest, most unusual things I've made out of Stir. You melt some feta with cream to make a sharp, rich sauce that you spread on individual plates. On top, arrange some roasted eggplant and over everything pour a fabulous dressing of sauteed shallots, garlic, anchovy, olive oil, sherry, yellow raisins and pine nuts. I had no yellow raisins so used dried pears instead and they worked beautifully. This was another brilliant melding of contrasting flavors and textures, and I think the recipe may be worth the price of the book.
Posted by tipsybaker at 8/26/2010 06:07:00 PM