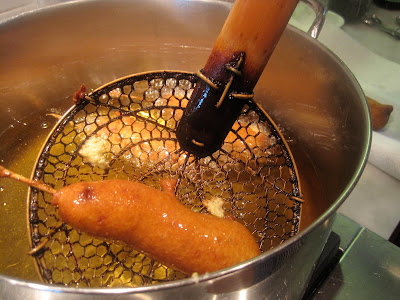 Dinner 1: My sister, Justine, and her family came over and we made corn dogs. I used a recipe from Staff Meals at Chanterelle that involves, as all corn dog recipes seem to, dipping hot dogs in a raised sweetened cornbread dough before plunging them into hot fat.

Here's what I wrote about this recipe in the margin of the book in March 2003: "Very crispy-- not too doughy. Tasted good. Quality of the hot dog does matter."

Here's what I wrote in March 2006: "Not as great as remembered -- but not bad. Used leftover batter to fry Milano cookies and now those WERE great."

Yes. I think we all are. Justine and I used to fetishize corn dogs based on their "treat" status when our parents took us to the rodeo, but at a certain age any food that entails this 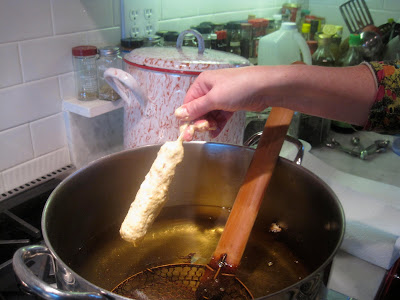 The homemade corn dogs were edible. We ate them. But the frozen corn dogs I bought to compare them to (see suspiciously tidy, symmetrical golden specimen at far right) 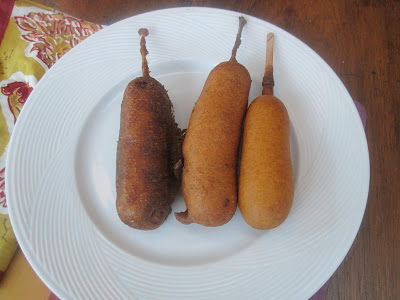 were repulsive. Someone actually spit out a mouthful, though I won't say who. I tried to get everyone to explain why these were so disgusting and no one could. Even I couldn't. Maybe it's just the concept of a frozen corn dog?

The meal was not all bad. I made a refreshing cole slaw out of Stir, a basic mayonnaise dressed slaw with some carrots. Not worth buying the book for, but very good. 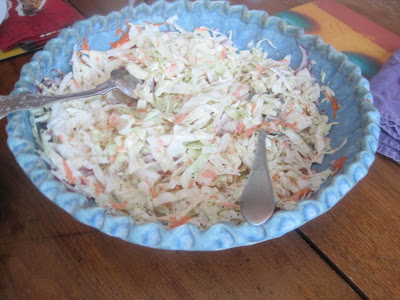 And dessert was fantastic, engineered by Isabel start to finish. She wanted to invent an ice cream and did so: chocolate ice cream with Nutella and marshmallow swirl. I think she froze the Nutella, but I'm not sure.

She also made the cones: 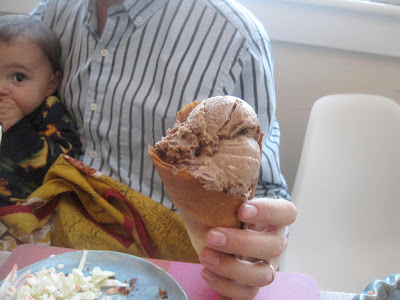 A lot of them broke so there weren't enough to go around, but the shards were crunchy and delicious used to scoop ice cream out of a dish. I need to get her to write a guest post to explain how she did it.
Posted by tipsybaker at 8/14/2010 09:26:00 AM