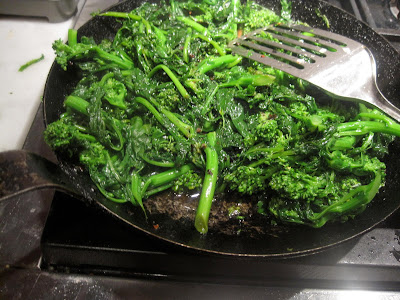 It really is hard to whip up an Ad Hoc At Home dinner without planning well in advance. Yesterday afternoon I surveyed my options and they were few. Many, maybe even most, of Thomas Keller's recipes require some step -- a special order from the butcher, brining, marinating, a blowtorch, homemade court bouillon, chive oil, slab bacon, serrano ham -- that I could not make between 4 and 5 p.m. and have dinner on the table at 7:15.
Don't worry, I'm not going to belabor this endlessly. I'm up for the game! I'm just explaining why last night I made the pan-roasted halibut and sauteed broccoli rabe, among the few Keller recipes that sound very boring, but also require no special ingredients or advance planning. These dishes actually were very boring, and I say that as someone who loves both halibut and broccoli rabe.
Abridged family response to meal:
Owen: I don't like fish.
Isabel: You ALWAYS say that about everything. What IS this vegetable?
Tipsy: It's broccoli rabe. I love it. It's bitter.
Isabel: Um, yeah. I noticed.
Husband: My favorite vegetable is celery and cream cheese.
Isabel: I like vegetables that aren't all wrinkled.
Owen: I like carrots that aren't cooked.
It went on like that. You know, discussing ideas, values, Bach. After all, the dinner table is the cradle of civilization.
Let's just hope Alice Waters is wrong about that.
When I was at the supermarket yesterday I bought chives to make chive oil, and parsley to make parsley water, both of which are essential components of Keller's asparagus coins, which I planned to serve tonight. But last night I was too tired to put the chives in the blender and make the oil, which requires 24 hours to steep, so we will not be dining on asparagus coins. I did track down some slab bacon, so I guess I can make his asparagus stew instead.
Here's why I was tired: 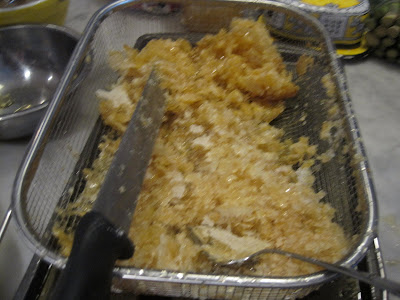 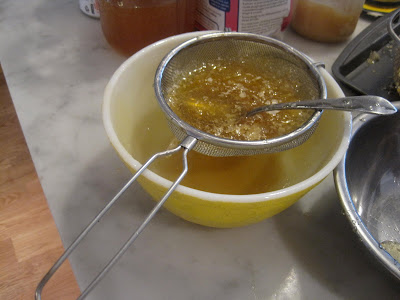 After a long talk with a bee expert about the fate of our lost bees and the future of our brand new bees, I decided to harvest last year's honey and let the new bees forage. These pictures do not quite convey the sticky drudgery of scraping, crushing, straining and re-straining required to hand-extract several gallons of honey in an ordinary kitchen. 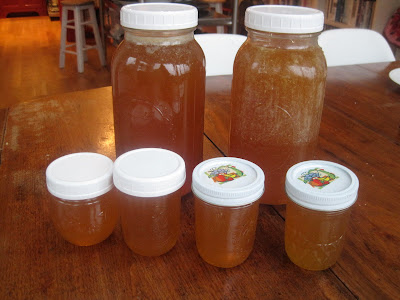