Menagerie photos and my take on Pioneer Woman 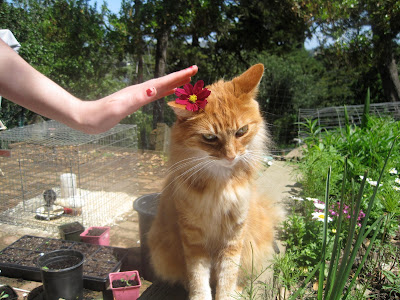 That's Emily, an excellent mouser and delicate beauty. She's almost ten.
Owen is holding Cindy and Linda, or Linda and Cindy, who are roughly 2 weeks old. 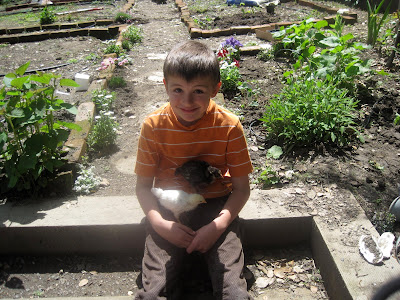 We bought them on Tuesday and they're living in a cage in our laundry room. One is a white Plymouth Rock, one is a gold-laced Wyandotte, and I can't wait for them to grow up and move their messy, cheeping selves outside.
We planted potatoes, carrots and flowers the other day, and when I uploaded these photos a few minutes ago I was startled by how idyllic and wholesome it all looks -- the springy garden, cute animals -- when in fact that day wasn't pleasant at all. The sun kept going behind a cloud, the kids bickered incessantly, and ever since my mother died I've felt like I'm trudging through heavy sand. Even sleeping I feel that way, so you can imagine the joy of amending soil. We'd have been better off at the mall.
These are Pioneer Woman cinnamon rolls, which tasted just like you'd expect: 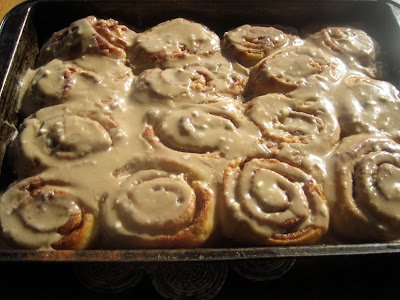 Isabel baked them and they were delicious, but we all agreed they were too much -- too sweet, too rich, too heavily iced, too many. If that sounds irresistible to you, the recipe is here.
I think we are now done cooking from Pioneer Woman, mostly because we're running out of recipes. I cooked a lot of dishes I never posted about, including both of her pizzas (flawed), the mac n' cheese (ditto), oatmeal cookies (great), chicken-fried steak (even better), and scones (killer). The fried chicken was fair, the biscuits so-so, the mashed potatoes a success, the pineapple upside-down cake enormous. Fully tally of how her recipes turned out coming soon.
Pioneer Woman has been cheerful, easy-going company over these last few months. Isabel, who is 13, has baked extensively, independently, and successfully from the book and now follows the blog. Despite dramatic differences in temperament and taste, to my surprise, I have also come to love Pioneer Woman.
A lot of cookbooks make me feel slightly bad, like I don't quite measure up, that I'm doing something wrong that the reproachful author is going to help me fix. Alice Waters makes me feel morally lazy and Martha Stewart makes me feel like a slattern. Just holding one of Thomas Keller's books makes me feel innately tacky. Marcella Hazan is a peerless instructor, but a cantankerous, imperious kitchen companion. Mark Bittman has turned preachy. Et cetera.
Nigella Lawson never makes me feel inadequate, and neither does Ree Drummond. Drummond is open-hearted, corny, accepting, and generous, and Pioneer Woman Cooks strikes me as a completely authentic expression of her buoyant personality and unpretentious aesthetic. She isn't trying to correct or reinvent mainstream American foodways however dubious they may be, and cooking from her book has been enjoyable and restful. Maybe I just didn't realize quite how fraught it had all become. Pioneer Woman makes it seem perfectly okay to braise a giant, non-organic pork butt you bought at Safeway and apply an inch of frosting to your brownies and stop trying to get the kids to like squid and chipotle and eat their broccoli raab, whatever the heck that is. Michael Pollan -- who's he? Chicken-fried steak and potato skins made this nation great!
Do I think it's absurd that the only green vegetable recipe in the entire book is an iceberg lettuce salad? Of course. That's very silly. The mountains of butter and sugar she calls for blow my mind. I love squid and chipotle and broccoli raab and will persist in trying to get my children to eat them because I would die of boredom if I had to cook beef and potatoes sprinkled with Lawry's seasoned salt for the rest of my life. Deep down, I will always feel guilty and creeped out buying factory-farmed meat from Safeway, and I believe this feeling is warranted.  I also believe that too many chicken-fried steaks and potato skins have made Americans -- most of whom who do not perform strenuous physical labor on cattle ranches -- fat.
But so would too many (much?) steak frites. I was always happy to open Drummond's book, much happier than I predicted starting out. I never flipped the page because a recipe was outrageously complicated or required I mail order vanilla paste or search for Little Gem lettuces or acquire a tagine. She's appealing in the way that Ronald Reagan must have been appealing after Jimmy Carter suggested people turn down their thermostats and put on their sweaters. I'm definitely the sweater-wearing type and I'm sure I would've voted for Carter. I will almost certainly acquire a tagine someday and I am dying to lay my hands on some vanilla paste. But I do get why Reagan was elected and I get why Pioneer Woman Cooks has become a best-seller. I would not propose it as a culinary bible for our times, but this book, however reactionary, is a lot of fun. I recommend it.
Posted by tipsybaker at 4/17/2010 01:05:00 PM