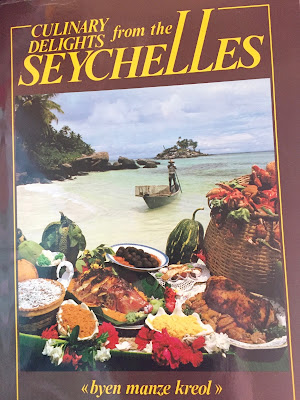 For Christmas, Mark gave me Culinary Delights from the Seychelles, a captivating and peculiar vintage title that includes recipes for delicacies like turtle steak and fruit-bat curry: “Skin the fruit-bats and remove their heads and insides, wash thoroughly to remove the blood, cut up and set aside.”

My sister gave me Mario Batali’s Big American Cookbook and my father gave me both A New Way to Dinner by Amanda Hesser and Merrill Stubbs and Alton Brown’s Everydaycook. So much I want to try from Everdaycook: coconut oats, a roasted-broccoli sub, chicken salad, kale salad, two brussels sprouts recipes. Healthy fare. Sadly, for the first time in several years my New Year’s resolutions include the word “diet.”

More on cookbooks in coming weeks.

We always drive down to Los Angeles after Christmas so there we were for the last few days of 2016. In L.A., I like to eat and go to movies. To get a jump on my New Year’s diet, I tried to focus on movies this trip. Other than some Blue Star donuts, Kettle Glazed doughnuts, several pounds of Korean bbq, stray leftover Christmas candy, a friend’s daughter’s homemade macarons, and movie theater popcorn, I think I did really well.

Two movies from the trip that I must recommend:

*Our first day in L.A., Owen and I saw O.J.: Made in America, the 464-minute ESPN documentary about the life of O.J. Simpson. Owen was furious when we sat down at 1 p.m. because I’d forced him to walk the two miles to the theater, we were the only people there (“It’s just weird!”), and his Coke was flat. He said, “I’m so disappointed in this whole situation and I’m so disappointed I let myself get talked into this.” He said he might text his father during the first intermission and leave.

He didn’t. When we walked out of the theater at 9:15 p.m. he was incandescent.

OJ: Made in America is an enthralling, transcendent masterpiece. I know it’s hard to square “ESPN” and “OJ” with “enthralling, transcendent masterpiece,” but trust me. Trust Owen.  I wince when people describe something like a piece of cake or a movie as “a religious experience,” but I’m about to do just that. Bear with me here. I’m going out on a limb.

Recently on a podcast I heard someone define God as “everything we don’t understand.” I wasn’t raised with religion and the most familiar image of God in my Judeo-Christian world was an elderly man with a beard who passed down a bunch of laws on a stone tablet. This never seemed plausible to me probably because my parents never tried to convince me that it was plausible. (My grandmothers did, but parents trump grandparents.)

But the idea that God is “everything we don’t understand?” That works for me.

Every now and then I think I get a glimpse of an underlying wholeness to the chaotic world. Corny though it sounds, sometimes this happens to me in movies. This year it happened in an Indian film called Court and in Krzysztof Kieslowski’s Dekalog, which was my favorite cinematic experience of 2016 and perhaps my favorite cinematic experience ever.

And it happened with the O.J. documentary. I momentarily comprehended something previously incomprehensible. In this case, I understood how an achingly beautiful young man blessed with talent and grace went from hero to villain to pathetic buffoon over the course of a few decades. How the particularities of his journey intersected with larger forces roiling American culture. How a vast cast of bizarre and vivid characters (the film is narrated by journalists, preachers, former teammates, black childhood friends of O.J., white adult friends, Marcia Clark, jurors in the trial, . . ) all figured into the saga. The film showed how football, beauty, hubris, riots, history, vice, character, sex and a thousand other things fit together perfectly. Horribly, but perfectly. Inevitably. What had previously seemed crazy, complicated, and contradictory made complete sense. If you wanted to, you could even extrapolate the laws laid down by the old man with the beard from the O.J. tragedy.

It took my breath away. When it was over, we walked out into the night and the vision started to dissolve. But I know that the coherence is there. This is probably not your experience of faith, but it’s the closest I ever come.

On our last day in L.A. Owen and I saw 20th Century Women which you will be relieved to learn I am not going try to describe as a religious experience. It was just a sweet, wise, flawed film featuring a dazzling performance from Annette Bening as the single mother of a teenaged son living in Santa Barbara in 1979. There were so many charming things in this movie: Greta Gerwig dancing, Billy Crudup smiling, a shambling old house, snappy dialogue, Our Bodies, Ourselves, Judy Blume’s Forever.

Permit me a shallow moment: If Annette Bening has had plastic surgery or attempted any other anti-aging interventions, she hadn’t done so in the months before making this film. I am ashamed to admit that it took some adjusting on my part. You see wrinkles so rarely on the big screen that they come as a shock when you do. (Marcia Clark made some surgeon very rich.) But there she was up there, the great actress and beauty Annette Bening, with normal-person wrinkles. She did not seem to feel very bad about her neck. In fact she did not seem to feel bad about her neck at all. God bless her. She looked like all fair-skinned women in their 50s looked until very recently, albeit with star charisma, and once my eyes and attitude adjusted, I found her extraordinarily beautiful, not in spite of the wrinkles, but because of them.

I mentioned that it was strange to see an actress who hadn’t had plastic surgery in a movie and Owen said, “I know, that was really nice.”