Isabel went back to school yesterday and on the way to the airport she and I stopped at Arsicault in San Francisco to try one of the bakery’s much-lauded croissants. Bon Appetit named this tiny, humble place 2016 “Bakery of the Year” on the strength of that croissant. How good can a croissant be? Bon Appetit: “simultaneously so preposterously flaky it leaves you covered in crumbs, so impossibly tender and buttery on the inside that it tastes like brioche, and so deeply golden that the underside is nearly caramelized.”

After that excruciating hyperbole and given that Arsicault is three blocks from my childhood home, I had to try one of the things. So there we were on a Sunday morning, late for the airport, standing in line, hungry, a little anxious, cold. I became silently, irrationally irritated at the innocent people in front of us. How dare they be in front of us in line. Why did they all have to use their credit cards to buy one or two croissants? Is it so hard to visit an ATM? Such lazy, irksome people.

Finally, we got to the front of the line and I instantly forgave everyone. We bought our croissants, ran to the car, and I ate my croissant while driving down 19th Avenue somewhat faster than I should have. While I remember enjoying it, I could not tell you if it was “impossibly tender and buttery” or whether the underside was “nearly caramelized” or anything else about it.

I understand why magazines do it, but it’s silly to overhype a croissant. At least overhype something weird and new, like a cruffin.

We got to the airport, I kissed Isabel goodbye, watched her wheel her giant suitcase into the terminal, and fell into the usual post-visit funk, something I suspect will happen every time I put my children on planes to far-away homes for the rest of my life.

I texted Isabel today to see what she thought of the croissants because we hadn’t discussed them and I wondered if she had picked up on any extreme wonderfulness: 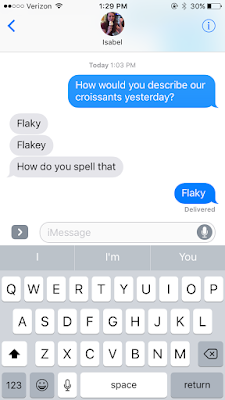 That’s all I’ve got for you today. I’ve been cooking from Alton Brown’s EveryDayCook and although everything has been good, nothing has reached the heights of those broccoli sub sandwiches. Those? Can’t overhype those.
Posted by tipsybaker at 1/16/2017 05:02:00 PM