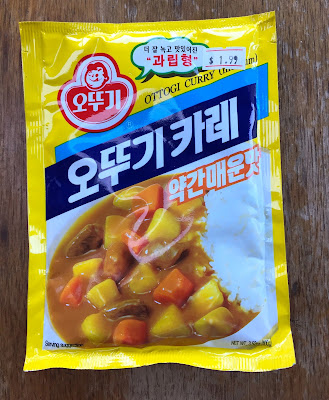 If the internet can be trusted, the history of Korean curry rice goes like this: The British colonized India in 1858, acquired a taste for curry, and developed their own version of the dish that relied on a mild, dumbed-down spice powder. They passed their bastardized curry along to the Japanese towards the end of the 19th century. The Japanese occupied Korea in the early 20th century and passed along the Anglo-Japanese curry tradition to the Koreans. But curry only become popular in Korea with the introduction of Ottogi curry powder in 1969. As far as I can tell, there is no Korean curry without Ottogi curry powder, just as there is no Shake n’ Bake chicken without Shake n’ Bake. This curry powder appears in every Korean curry recipe I’ve seen. It isn’t like the curry powder we buy in a little jar from the Safeway spice rack. Ottogi curry powder comes in a large, shiny envelope and is full of thickeners, sweeteners, oils, spices, salt, and MSG. You stir this into a pan of cooked meat and vegetables, simmer for a few minutes, and voila: thick, glossy, salty, sweet, cloying Korean curry that you serve with white rice.

I served it the other night for dinner. Recipe here. It was easy, filling, starchy and satisfying in the way of a casserole made from cream-of-mushroom soup. Unsurprisingly, Mark and Owen liked it a lot.

I’m very glad I tried it.  Curiosity satisfied. I will never make it again. 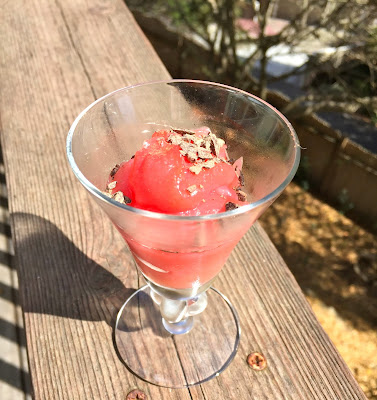 Twenty years ago, I bought Clifford Wright’s Cucina Paradiso, which contained a recipe for gelo di melone, a dessert that, on paper, blew my mind. Every summer I thought about making gelo di melone but never did, in part because I didn’t want to be disillusioned. I pulled that book out again the other day to see what had so captivated me. A  paperclip was still affixed to the watermelon pudding page and it had rusted onto the paper.

Here is Wright’s headnote to his recipe for gelo di melone:

“What an exquisite summer dessert! The main ingredients were all introduced by Arab agronomists and traders of medieval Sicily -- watermelon, cinnamon, jasmine, candied orange, and pistachios. . . . The traditional recipe calls for jasmine water and cucuzzata (candied squash), and the pudding is decorated with jasmine flowers.”

If you don’t think that sounds thrilling, there might be something wrong with you.

To make gelo di melone, you puree watermelon, cook it down with sugar and cornstarch until “velvety,” pour into dishes, chill, and top with chopped chocolate, pistachios, and candied orange. Unfortunately, I accidentally cooked my pudding well beyond “velvety” all the way to “pasty.”

This definitely detracted from the pudding’s charm. But I think the real problem was that cooked watermelon has a faintly vegetal taste. I’m sure that if I were on vacation in Sicily I would fall madly in love with this cool, beautiful, exotic dessert. But in a messy suburban California kitchen when three people were in a hurry to go watch Stranger Things, gelo di melone just didn’t play that well. Both of my dining companions had a bite and pushed away their dishes. One of them promptly opened a beer and the other toasted a PopTart. I ate my whole serving, but really only out of duty.

I’m glad I tried it. Curiosity satisfied. I will never make it again.

If it sounds like this was a disappointing week in the kitchen, au contraire! Curiosity is a more powerful drive than pleasure. I was very pleased with my cooking experiments. I have some really exciting projects for the coming week. Like this.