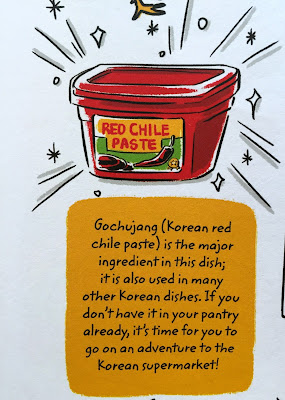 Buldak is the Korean word for “fire chicken. According to wikipedia’s vague and suspicious entry on the topic, buldak was invented by an entity called Fuyuan Foods which patented the name buldak “around” the year 2000. The patent expired in 2008 and now there are a number of buldak chains in Korea. Buldak was particularly popular during South Korea’s economic downturn as “people seek spicy food in order to relieve stress.”

If that’s true, buldak would do the trick. Maangchi calls for 1/2 cup of chili flakes plus 3 tablespoons chili paste in her buldak. Read that last sentence again if you were skimming or daydreaming.

Apparently, buldak is well known to American aficionados of Korean food. A year ago, Jonathan Gold called it “faddish.”

But I had never heard of buldak until Maangchi posted about it.

There are various approaches to buldak, but here is Maangchi’s: chop chicken breast  into cubes, mix with a brick-red sauce of chili paste, chili flakes, corn syrup, oil, soy, garlic, and ginger. Buldak is often fried, but Maangchi has you cook it with no added oil in a cast iron skillet. Top with delicious little toasted rice cakes and cook some more. Blanket with a full pound of mozzarella cheese. Broil until the cheese is melted and starting to blister. Devour. 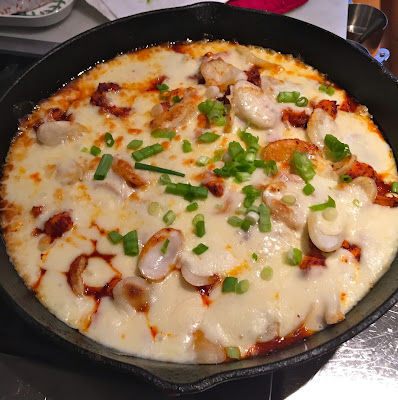 Owen had seconds. Mark had thirds. I kept eating scraps out of the pan while I was cleaning the kitchen after dinner. It was even better heated up for lunch today. I want to be clear: This is not some mysterious and miraculous culinary feat. It’s exactly what it sounds like: spicy chicken, starchy tidbits, and a ton of melted cheese. And if that sounds fabulous to you, you will think this is fabulous.

Would buldak be better with beef or pork or chicken thighs? Possibly. But chicken breast feels right to me, a bland, sensible counterweight to the bounteous fats and flavors of the sauce and cheese. Maangchi says that the rice cakes are optional, but I would disagree. Find a Korean market and buy some if you want this dish to rise to its full, decadent glory. I served it with rice but that was like serving nachos with rice, lasagna with rice, pizza with rice. No rice.

Maangchi’s cheese buldak. Recipe here. If you make it, let me know what you think. 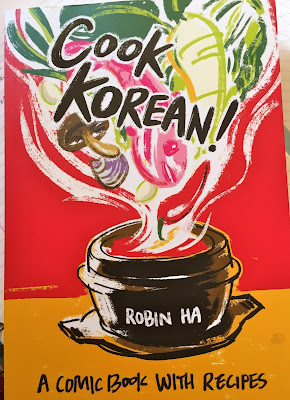 On another subject, I want to thank the person who recommended Cook Korean! Robin Ha’s comic book with recipes. (The illustration at the top of the page is from the book.) I love it! I would recommend Cook Korean! to anyone who is interested in an accessible introduction to Korean home cooking. It is clear, precise, thorough, lively, and charming. I’ve only made one recipe so far, the stir-fried pork, but it was the best of the three version I’ve tried. 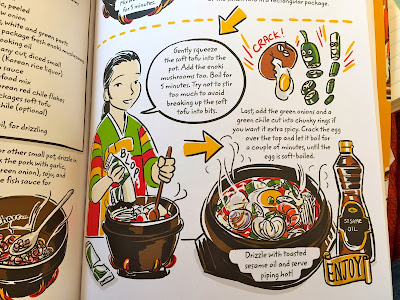